Man City vs Aston Villa- Aston Villa visits the Etihad Stadium on Sunday to play Manchester City for the Premier League title.
The Citizens lead Liverpool by one point, while the Lions still have a shot at the top half.

Nathan Redmond handed Southampton the lead against Liverpool, but the Reds turned it around to send the title fight to the last day.

Pep Guardiola’s team just needed a point if they had beaten West Ham United, but they fell 2-0 behind to Jarrod Bowen’s brace until Jack Grealish and a Vladimir Coufal own goal rescued a draw.

Man City would win the Premier League for the sixth time in 11 seasons with a win or a draw against Liverpool on Sunday.

Guardiola will not set his side up to draw, especially as City has scored in each of its previous eight Premier League matches and is unbeaten in 11 games.

Steven Gerrard never won a Premier League title at Liverpool, but the Villa boss might win it for them if he can silence the Etihad crowd on the final day.

The Lions couldn’t repeat their 3-1 Turf Moor success over Burnley as they drew 1-1 with Mike Jackson’s side on Thursday. Ashley Barnes’ penalty put the visitors ahead before Emiliano Buendia equalized.

Not keeping a clean sheet in four straight matches does not bode well for Villa, who have lost each of their past 11 league games on Man City’s soil. Villa’s two wins from their last 10 Premier League games might be regarded as concluding the season with a whimper.

Gerrard has all the motivation he needs to get a result this weekend, but Villa hasn’t won a Premier League match away from home against the league leaders since January 2000 (at Leeds). Continuing their recent run of goal-laden home performances would be a fitting way for City to clinch the domestic title. 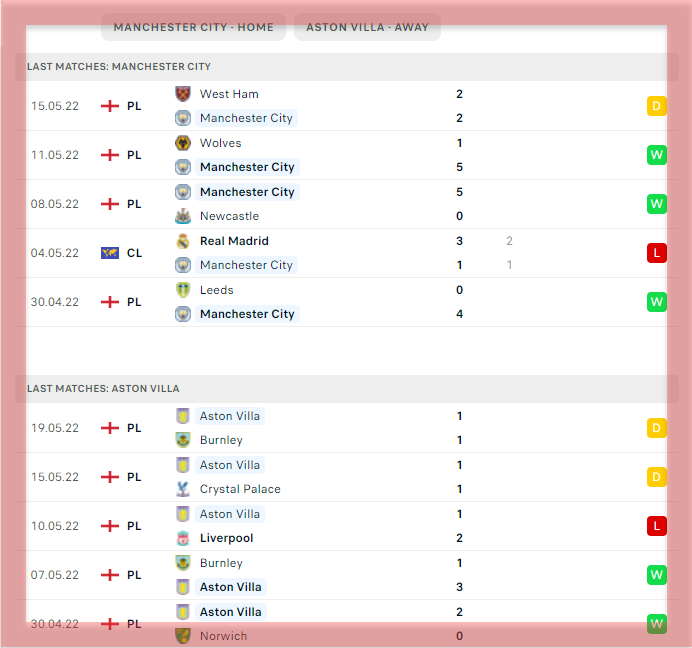