Norwich vs Spurs- Preview, and Prediction

Norwich vs Spurs- Tottenham Hotspur will try to qualify for the 2022-23 Champions League on Sunday against Norwich City.

Antonio Conte’s side needs just a point to finish in the top four, while Norwich is doomed.

Norwich’s hard-fought point against Wolverhampton Wanderers last time out came too late to rescue anything substantial for the Canaries.

The rock-bottom Canaries are only one point behind Watford but have a much worse goal difference. The Hornets face Chelsea on the last day, and Norwich will want to give their fans some joy before relegation.

The Canaries’ 1-1 tie with Wolves ended a five-game Premier League losing streak and a 360-minute scoring drought, but their 12 goals at home are the most in the league.

Norwich’s last three Premier League final-day games saw them surrender 10 goals while scoring zero – music to the ears of Tottenham fans, some of whom are nervous ahead of Sunday.

Antonio Conte wanted to “suffer” by watching Arsenal play Newcastle United on Monday, but the Gunners lost control of the top-four race.

The Lilywhites hung on for a key win that gives them a two-point advantage over fifth-placed Arsenal, whose goal difference is inferior. One point against the Premier League’s worst club should be enough to re-enter the Champions League. Chelsea hasn’t secured third place yet, but a huge goal differential swing is needed.

Tottenham fans aren’t confidence in their team’s ability to manage pressure, but Antonio Conte’s side has won 11 of the past 15 Premier League points available and has only conceded one goal – to Liverpool – in their last four away games.

Spurs beat Norwich City 3-0 in December, but they’ve lost to already-relegated teams on the last day three times, which won’t alleviate their anxieties.

Norwich vs Spurs – Head -To- Head 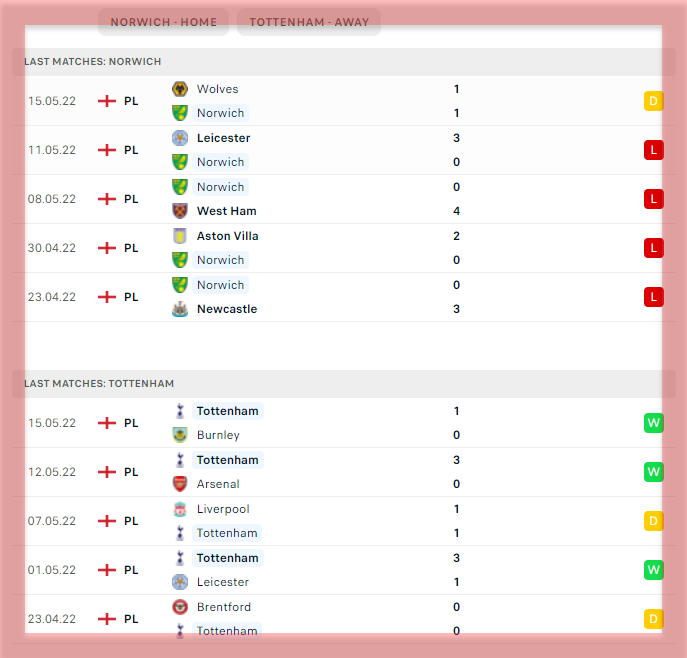