Ilves vs HIFK – Preview, and Prediction

Ilves vs HIFK – Ilves got off to a sluggish start this year. At the beginning, they were largely winless, and it was clear that they were desperate to establish a winning streak. They were able to achieve remarkable results as a result of the desperation described above.

Ilves beat Lahti 3-2 in their most recent league match at home. They now have a four-game winning run in the league after the victory. In their forthcoming league matchups at home, they’ll be in the best of spirits to confront their opponents.

HIFK, on the other hand, is off to a dismal start this season. In the beginning, they produced winless results, and they continued to do so for the rest of the tournament. Their terrible performance led to their present place on the table, which is currently at the bottom.

In their most recent league game, HIFK fell to VPS by a score of 1-5. Because of this devastating loss, they will not be able to keep their spirits up. There has been a third straight loss for them, and they have yet to win in the league so far this season.

Ilves has dominated this head-to-head matchup in recent years. Seven of the last ten head-to-head encounters between these two teams ended in a tie or a victory for the home team.

Ilves won 1-0 the last time these two teams met at this stadium. Recently, Ilves’ home form has been sensational. After losing their first home game to KuPS, they’ve been able to string together several wins. They are currently on a four-game home winning run.

HIFK, on the other hand, is winless so far this season on the road. Due to their recent dismal form, they have struggled mightily on the road this season.

In their first four road games of the season, they drew and lost twice each. Ilves are the team to beat in the Veikkausliiga on Wednesday, thanks to their great head-to-head record and good league run.

Ilves vs HIFK – Head -to -Head 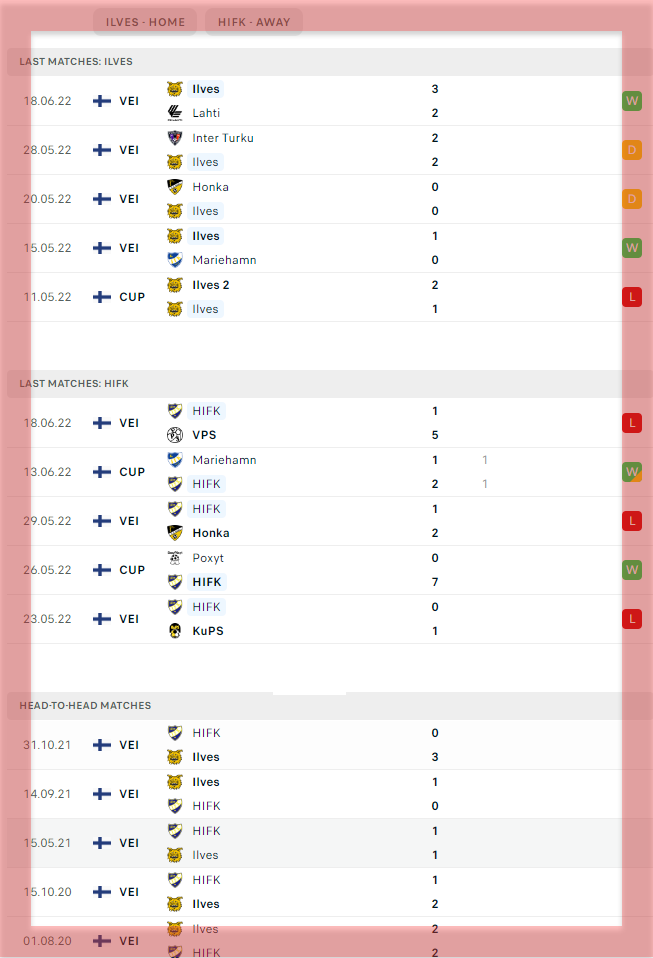