Getafe vs Barcelona – Preview, and Prediction

Getafe vs Barcelona – Barcelona only needs one more victory to clinch second place in the league. After a year of disappointments and struggles, they will be eager to put the matter to rest and claim the title of best team in Spain, at least after Real Madrid.

It’s also worth noting that their form has improved after a string of disappointing performances. They’re winning again, and they’re putting the ball in the back of the net with ease.

Meanwhile, Getafe is ranked 15th out of 20 teams, and they have yet to mathematically secure their safety.

They are only 5 points away from relegation, and with two games remaining, they could yet be relegated to the lower division.

While it is a long shot, the club has found nothing in which to have faith this season, and this is an area in which the squad must improve.

They’ve also been consistently allowing goals, and they’ve had a dismal head-to-head record against this opponent over the years. Based on these data, the Catalans are expected to win this weekend.

In four of the previous five meetings at this venue, the visitors have scored two or more goals. Getafe was held to a 1-1 draw by Osasuna on the road the other day.

They’ve also gone three games without a win, and have lost 11 of their last 13 games overall. The Catalans, on the other hand, defeated Celta Vigo 3-1 at home last week.

They’re also on a three-game winning streak and have scored two or more goals in each of those games.

Furthermore, they had won eight of their previous nine road trips, with their last road loss coming in the first week of December against Bayern Munich Champions League.

Considering these facts, as well as Barca’s historical head-to-head supremacy, anticipate them to win convincingly on Sunday. Barcelona has scored the most goals in the competition, second only to Real Madrid.

Along with the Royal Whites, they are one of just two teams in the competition to have won four of their past five league games. 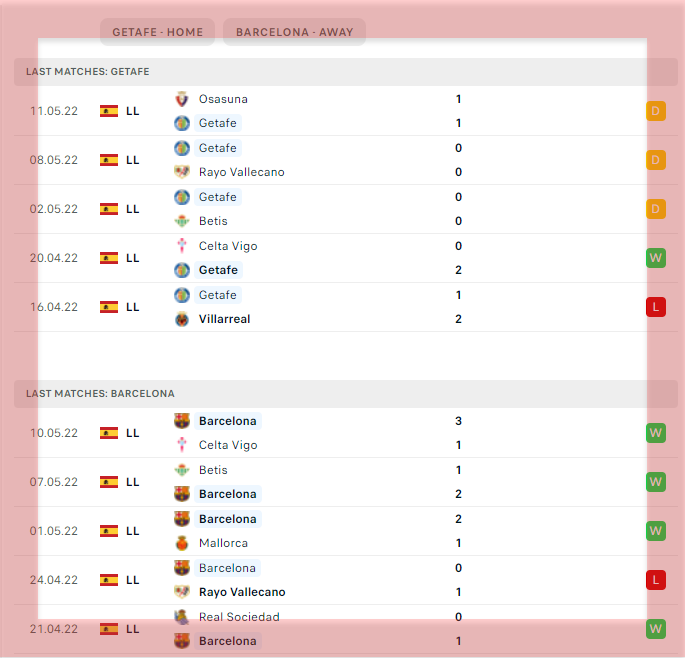