Aston Villa vs Crystal Palace – These two teams have virtually ruled themselves out of any European events next season. They are comfortably positioned in the middle of the table, and the prospect of relegation has been removed.  In their opinion, they must end their campaign on a favourable note in order to have high expectations for the next campaign. Both teams have been allowing goals in large quantities recently, as well as dropping some points.

Nonetheless, they have pulled off some impressive victories. Despite their defensive struggles, they have been able to put opponents’ back lanes to the test. More significantly, whenever these two have faced off in the past, there have been lots of goals.

As a result, expect a high-scoring match between Aston Villa and Crystal Palace this Saturday at Villa Park.

Aston Villa lost 1-2 to Liverpool at home the other day, and they had also lost six of their previous eight games overall. It’s worth noting that they were on a four-match losing streak at the time.

Take into note that the only two victories during this period came against Burnley and Norwich, both of whom have been fighting relegation since the beginning of the season.

Crystal Palace, on the other hand, defeated Watford 1-0 at home in the previous game week. They had, however, lost four of their previous six games and were on a three-game losing run in the process. Furthermore, the squad had lost three of their previous four away games. Taking these findings into account, as well as recent head-to-head performances, expect a goal fest between the two this Saturday. 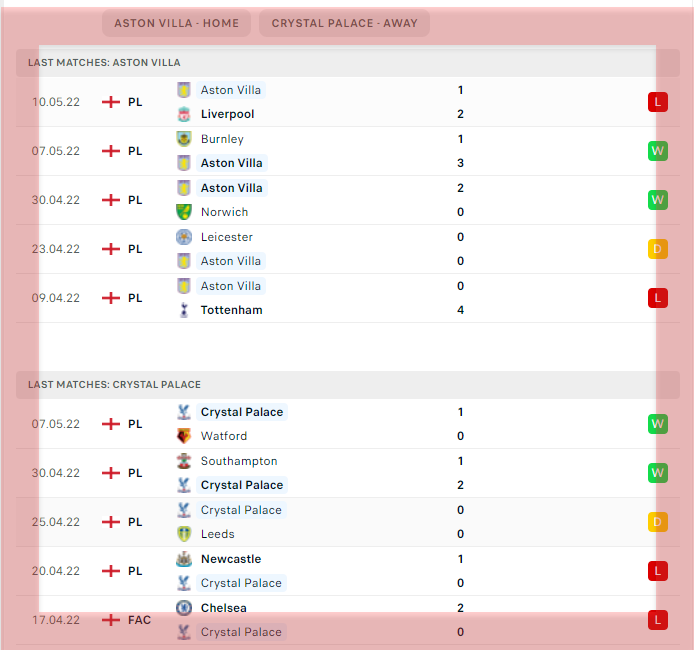