Croatia vs Canada – Preview, and Prediction

Croatia vs Canada -Croatia will need to step up and offer a much braver performance here in the second round. This should leave space for the Canadians to strike as we expect them to bring another attacking-minded performance here.

Nevertheless, looking at the odds, we have to stick to Croatia who do have much more quality in their ranks. The midfield trio of Modric, Kovacic, and Brozovic is probably the best on the planet, and we just can’t ignore the 2.10 odds offered for Croatia’s victory here. The value is great with Croatia to win & Both Teams to Score bet at the 4.75 odds.

The runners-up from the previous World Cup did not get off to the start they wanted, The team led by Zlatko Dalic only played a goalless draw in the tournament opener against Morocco on Wednesday morning.

The Croats were surprisingly toothless in the final third. They lacked ideas and had only a single proper opportunity throughout the 90 minutes of play (through Nikola Vlasic late in the first half).

To be fair, Croatia did not allow the Moroccans get much at the opposite end either but it was still a mediocre overall performance from them, Dalic’s troops now need to go for the win on Sunday afternoon when they take on Canada in the second round.

They know Belgium will wait them in the third round and anything but a three-pointer here would put Croatia in a very tough position ahead of the decisive matches.

Whilst Croatia disappointed their fans with a lethargic performance (that did get them one point, though), Canada were one of the most positive surprises of the tournament in the first round, John Herdman’s men produced a very brave display against European heavyweights Belgium on Wednesday.

The value is with Croatia at the 2.10 odds and Canada did look good against Belgium but we just can’t compare them to the World Cup runners-up Luka Modric and company have enough experience to get the much-needed win.

Unfortunately, they finished the game with empty pockets after an unfortunate 0-1 defeat on the occasion from Belgium’s lone real chance in the 90 minutes of play, Canada had numerous opportunities, even the penalty-kick which was poorly taken by their biggest star Alphonso Davies.

Herdman’s men were very active in the final third, constantly searching or the holes in the rivaling defense. At the end of the day, they registered 21 shots towards the Belgian goal four days ago.

Croatia vs Canada – Head to Head 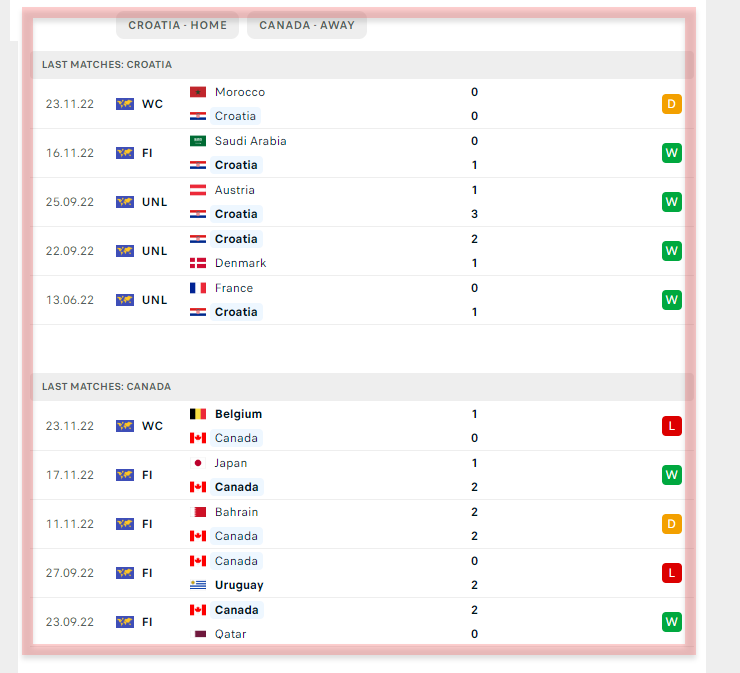