Belgium vs Morocco – Preview, and Prediction

Belgium vs Morocco -Belgium, as always, have started strongly. They have great hopes for this campaign, and they did make deep runs in most of their recent international tournaments.

Morocco might have held Croatia to a draw, in their opener. But the Belgians could be a whole different ballgame.

They are ranked second in the world at the moment, and that was after a long spell at the top. They had made it to the Semi-Finals of the previous edition of the competition and were placed third.

And this time around they are determined to go all the way. They recorded a hard-fought 1-0 win in their opening game, against the Canadians.

Credit when it’s due – the Belgians closed out their opponents defensively, despite Canada knocking on the door several times.

On paper at least, the Belgians have an easy group, and after the first round of fixtures they find themselves at the top of the table. Should they be able to record one more win this weekend, they could make it to the Round of 16.

Morocco might have registered a draw in their first game, and that too against Croatia. But keep in mind, that this is not the same team that made it to the Final of the previous edition.

This is an aging squad, and they simply cannot expect the Belgians to be of the same kind, The second-ranked team in the world are determined to make it count this time around. They have a great squad at disposal, and on top of that they have a good h2h record against this rival too.

The Belgians have a 100% winning record in official encounters and these two met in the Group Stages of the 1994 World Cup, and then Belgium registered a 1-0 win , They kept clean sheets in all but one meeting, Morocco are yet to keep a clean sheet – be it in official games, or friendlies.

While Belgium secured the third place in the 2018 World Cup, Morocco were bundled out in the Group Stages itself – and that too after they were placed bottom-most in their table.

The Belgian squad are much more experienced now, and believe in themselves that they can go deep into this tournament. They have been close to glory several times now, but fell short each time. But they hope the story will be different this time around.

The Moroccans also have the obvious disadvantage of not having enough experience against quality teams, and their counterparts for the day are one of the absolute best in the world.

In addition, the Moroccans also have a rather poor h2h record against this opponent All in all, it appears that Belgium will deliver another win this Sunday. It should be a close win, considering the quality of the Moroccan defense.

And coming to goal-scoring, this should be the chance for Michy Batshuayi to do his part for his country – in the absence of striker Romelu Lukaku. After all, Michy scored the lone goal in their win over Canada. 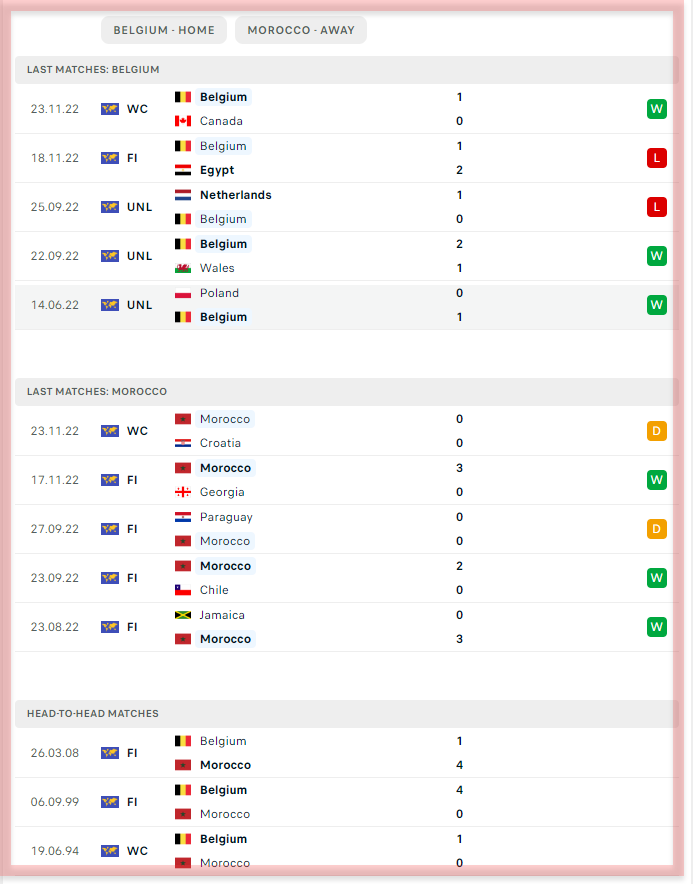