Corinthians vs Flamengo – Preview and Prediction

Corinthians beat Botafogo 1-0 at home to win their third straight Serie A match. Gustavo Silva scored the game’s sole goal in the 27th minute to send the visitors their 10th loss of the season.

Prior to that, Vtor Pereira’s side lost 2-0 to Atletico Goianiense in the quarterfinals on July 28. Time do Povo beat Boca Juniors on penalties in the round of 16 of the Copa Libertadores after two goalless draws.

Corinthians are unbeaten at home since a 2-1 loss to Santos in February’s Serie A. They’ll try to prolong that run as they take their first step towards the last four of this year’s continental extravaganza.

Flamengo beat Atletico Goianiense 4-1 at the Maracana Stadium to keep up their outstanding run in the Brazilian top division. Lazaro, Marinho, Arturo Vidal, and Victor Hugo scored for Dorival Junior in the first half before Wellington Rato scored in the 82nd.

They’ve won six straight games in all competitions, including four in Serie A, where they’re fifth, five points behind Tuesday’s hosts in second. Flamengo is unbeaten in the Copa Libertadores after six games, with seven victories and one draw.

After an 8-1 aggregate triumph over Deportes Tolima in the round of 16, next up for the Rubro-Negro is the first step towards ensuring a place in this year’s quarterfinals. In 2021-22, they lost 2-1 to Palmeiras in the final.

Corinthians vs Flamengo – Head -to- Head 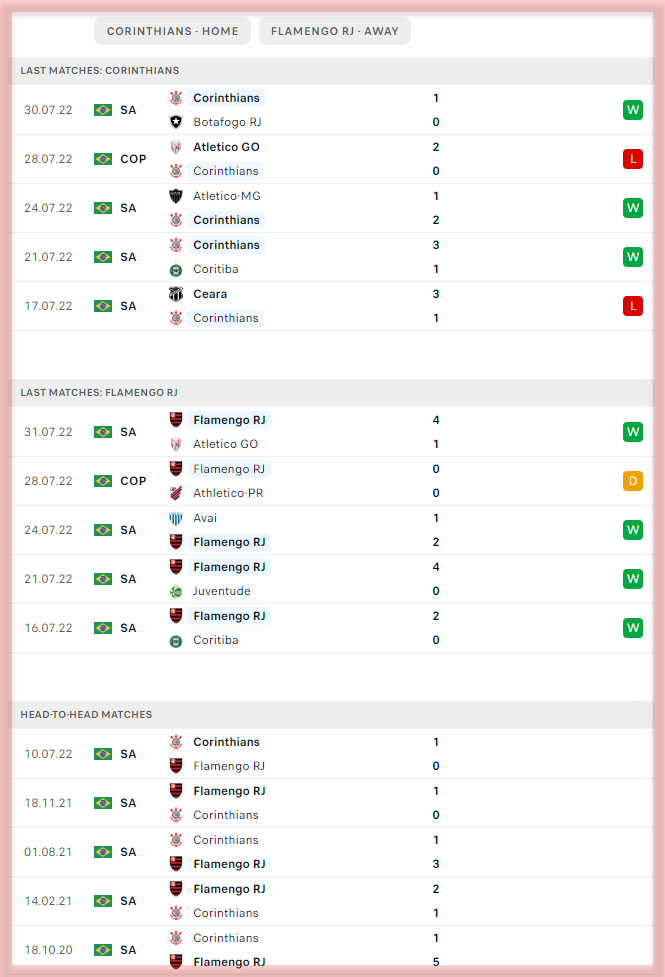