The first leg of their third qualifying round encounter begins tonight at the Sammy Ofer Stadium; the winner will advance to the playoff phase, while the loser will drop to the Europa League.

Maccabi Haifa, despite only entering the qualification process in the second round, have caused ripples in Europe’s elite club competition by stunning Olympiacos in spectacular fashion last Wednesday.

Tjaronn Chery’s fifth-minute strike laid the stage for a Frantzdy Pierrot brace and Mohammad Abu Fani’s late goal in the return leg in Piraeus after the teams had played to a 1-1 draw in the first leg. This may be the biggest upset of the summer.

Haifa advances to the second-to-last round of the preliminary round with a shocking 5-1 aggregate victory, increasing their odds of advancing to the group stage for the first time in almost a decade.

Due to their recent success in the Israeli Premier League, the Greens have earned another shot at the big time after coming so close in the previous two seasons (2018–19 and 2019–20).

Barak Bakhar’s team won the national championship in May, 2018, after a 10-year drought, and successfully defended it by an eight-point margin in May of the same year.

Last year, they lost to Kazakhstan’s Kairat in the first round of Champions League qualifying. They lost to Mechelen and Vitesse Arnhem in preseason friendlies before falling to Hapoel Be’er-Sheva in the Israeli Super Cup final on penalties.

However, Haifa will be riding high on Wednesday after their second round performance, thus Apollon Limassol may be nervously starting their campaign.

Apollon, a newcomer to the qualification process at this third-round level, defeated AEK Larnaca to win the Cypriot league last season and is now attempting to make their first appearance in a Champions League group stage.

Even though Alexander Zorniger’s squad has twice in the last five years reached the same stage of the Europa League, they have failed to advance to the knockout rounds both times.

While the stakes will be much higher over the next week, the former RB Leipzig and Brondby head coach has seen his team lose three of their four warm-up games, most recently a 1-0 loss to Torino in Austria. 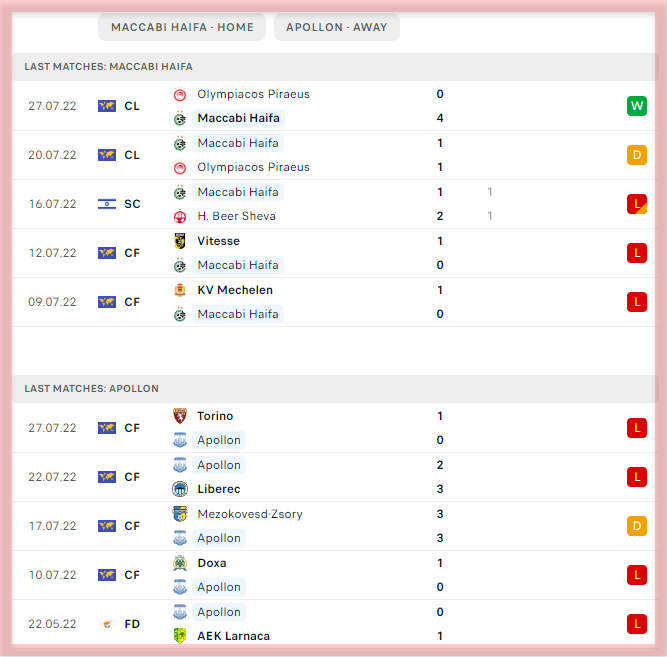