Cádiz vs Barcelona – Preview, and Prediction

Cádiz vs Barcelona – Today, Barcelona will travel to Estadio Nuevo Mirandilla to take on the league’s worst defence in a Matchday No. 5 La Liga matchup against the second-worst offence.

This matchup might also be characterised as the league’s weakest attack facing off against the second-best defence in the competition. In either case, all signs lead to the Catalans winning easily in a simple match this Saturday.

Barcelona began the season by playing Rayo Vallecano at home to a scoreless tie, but went on to win three convincing matches against Real Sociedad, Real Valladolid, and Sevilla, scoring eleven goals in the process.

Since players like Robert Lewandowski and Raphinha are enjoying their time on the field at the start of the season, it appears like Xavi has discovered the appropriate chemistry among the newcomers.

Seven days prior, they both scored in the 0-3 thrashing of Sevilla at Estadio Ramon Sanchez Pizjuan. With five goals in four games, the Polish attacker is tied for the league’s highest goalscorer.

In this matchup against Cadiz, the only team in the competition without a point after four rounds, he should have plenty of room to score in the final third.

In addition, Cadiz has yet to score a goal this year, and they are currently facing up against one of the greatest teams in the nation with a goal differential of 0-10.

Given that they were shut out in both of their head-to-head matches with Cadiz last season, Barcelona will be more determined to win this match.

In their previous six head-to-head matches, these two teams had an interesting record of two wins, two ties, and two losses each.

Three or more goals were not scored in any of their previous three head-to-head encounters. The fact that Cadiz has yet to score a goal this year makes us highly sceptical that they will succeed against a team like Barcelona.

On the basis of all we have seen from these two teams thus far in the season, anything less than a convincing victory for the visitors would come as a great shock. Barcelona is available at 2.00 odds to win by a score of zero.

Cádiz vs Barcelona – Head -to- Head 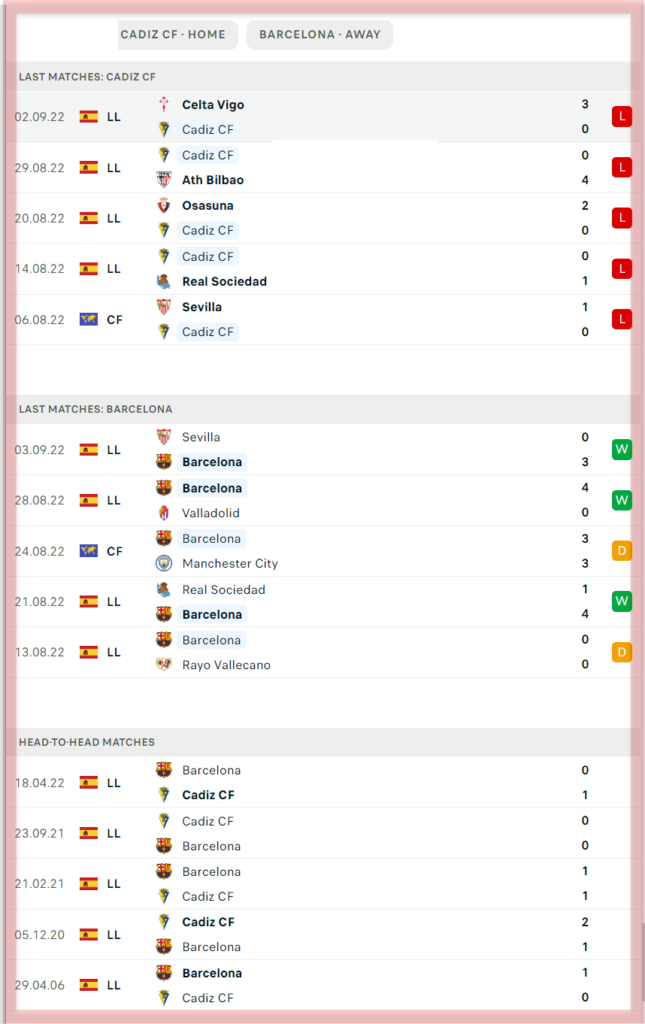