Brighton vs Chelsea – Preview, and Prediction

Brighton vs Chelsea – This Saturday, Graham Potter will be at The American Express Community Stadium in Falmer as his new team, Chelsea, prepares to face Brighton in the fourteenth gameweek. The former head coach of Brighton will undoubtedly encounter hostility because the local supporters haven’t yet forgave him for his abrupt switch to Chelsea earlier this season.

We are eager to see how this showdown between two intriguing teams plays out on Saturday afternoon, even without consideration of the Harry Potter saga. Brighton has been incredibly unlucky to score so little since Graham Potter’s departure. Under new manager Roberto De Zerbi, the Seagulls perform admirably, but they simply can’t capitalize on their opportunities in the final third.

Despite playing the defending champions at the Etihad Stadium, Brighton fared well the previous weekend as well. However, the strong performance will mean nothing because Erling Haaland scored twice to help Manchester City win 3-1. Brighton is in desperate need of a win today after losing three and drawing two of their last five Premier League games.

On the other hand, Chelsea does not play appealing football under Potter yet they do manage to win. With four straight wins, the Blues rose to sixth position in the Premier League standings. However, they will enter this match off of two distinct scoreless draws in the first two rounds against Brentford and Manchester United.

In the brief history of this matchup, Chelsea has dominated, winning 6, drawing 5, and losing only 1 of the previous 12 matches versus Brighton. It’s interesting to note that four of the two clubs’ previous six head-to-head matches ended in 1-1 ties. Only one of Brighton and Chelsea’s last seven head-to-head matches has resulted in three or more goals.

When considering this game from a betting viewpoint, the low-scoring draw is what first comes to mind. This is the exact situation we will back because the Draw & Under 2.5 goals FT option is offered at 4.00 odds. You can also attempt a second 1-1 draw, this time paid at 6.50 odds.

Brighton vs Chelsea – Head To Head 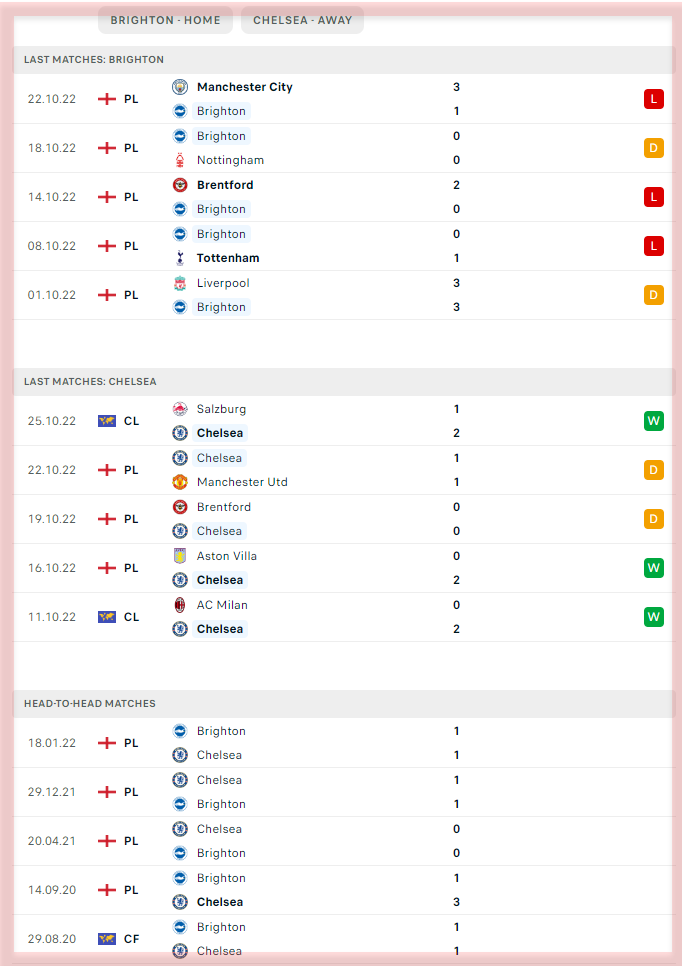