Brentford vs Leeds – Preview, and Prediction

Brentford vs Leeds – Brentford came from behind to overcome Everton 3-2 last weekend, and they now finish their first season in the Premier League since 1946/47 against a Leeds United team in a frantic two-way struggle to avoid relegation. Thomas, ominously for the desperate visitors,

Despite the fact that the ‘Bees’ are in fine form, the Brentford Community Stadium has not been a hotbed of excitement. Only 40 goals have been scored in 18 games (only Brighton’s AMEX Stadium has seen fewer), with both teams scoring on seven occasions.

While Brentford has little to play for in this game, Leeds has dropped into the bottom three following Thursday’s results due to their awful goal difference, forcing them to beat Burnley’s result against Newcastle to prevent relegation to the Championship.

Jesse Marsch’s honeymoon phase at Elland Road is well and truly over, with his side on a five-game losing streak heading into this match (D2, L3).

Suspensions to Dan James and Luke Ayling have hampered them, and they have conceded more away goals than any other top-flight team, bar Norwich. However, there are some advantages. United has won two of their past four away games (W2, D1), and only two of their nine road losses have come against teams currently in the bottom half of the table.

Leeds are winless in their last 11 away games against Brentford, dating back to a 2-0 victory at Griffin Park in Division Two in August 1950.

Brentford vs Leeds – Head -To- Head 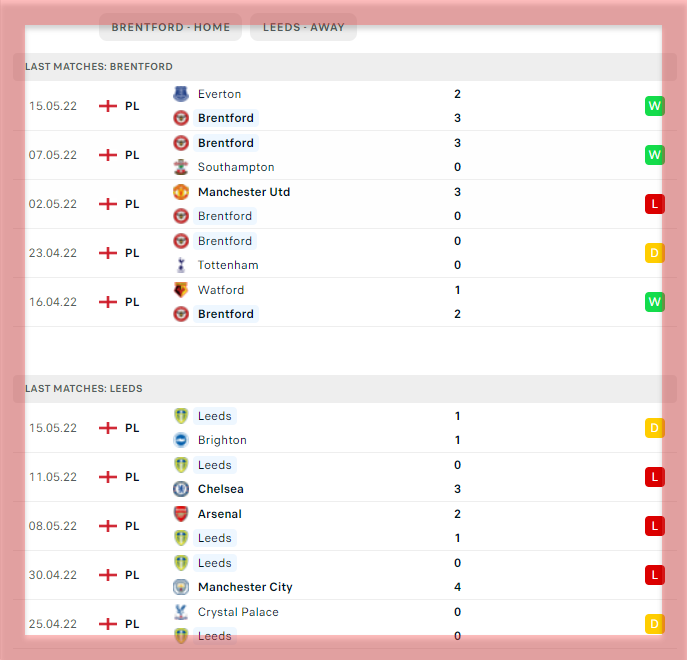