Barcelona vs Almeria – Preview, and Prediction

Barcelona vs Almeria –The Catalans are giving a strong chase for the Spanish league title. They are placed second in the table at the moment, trailing a single point below the toppers. They are in great form obviously, and will easily be the favorites this weekend here against the rather inconsistent Almeria.

Reigning champions and current toppers Real Madrid enjoy a lead of just one point at the top, and they have the additional burden of taking part in the Champions League.

For better or worse, Xavi’s men do not have that responsibility, and they can certainly give a lot of effort in going after the La Liga.

They just need to overcome this one-point deficit, and it helps their cause that Real Madrid are dealing with a lot if injuries as well.

Going on, Xavi’s men absolutely have the best defense in the competition this time around. They kept clean sheets in 10 of their 12 matches so far, and they also scored the most number of goals along with Madrid.

It is also to be noted that they are the only team in the whole competition to have won the last three games in a row. Meanwhile, Almeria are placed 13th in a table of 20, and so far they recorded just four wins. Only three teams let in more goals than them in the Spanish top flight this time around,

And they also have been the worst team in road games, In fact, they have a 100% losing record on the road barring a single draw,Barcelona surely are firm favorites this weekend at the Nou Camp this weekend.

The latest encounter ended in a 4-0 win for Almeria, They are on an eight-game winning streak, They scored 16 goals from the past four clashes at this stadium, The hosts have a 100% winning record here since 2000.

On the other hand, Almeria have a 100% losing record this season on the road in all competitions (barring a draw), and now they have to take a trip to the Nou Camp.

There is no universe where Almeria would be the favorites this weekend. Back Barcelona to deliver a compelling win, They already have ten clean sheets in the La Liga so far, and they are yet to concede a goal at home. Chances are high for them to register a win to nil.

Barcelona vs Almeria – To Head 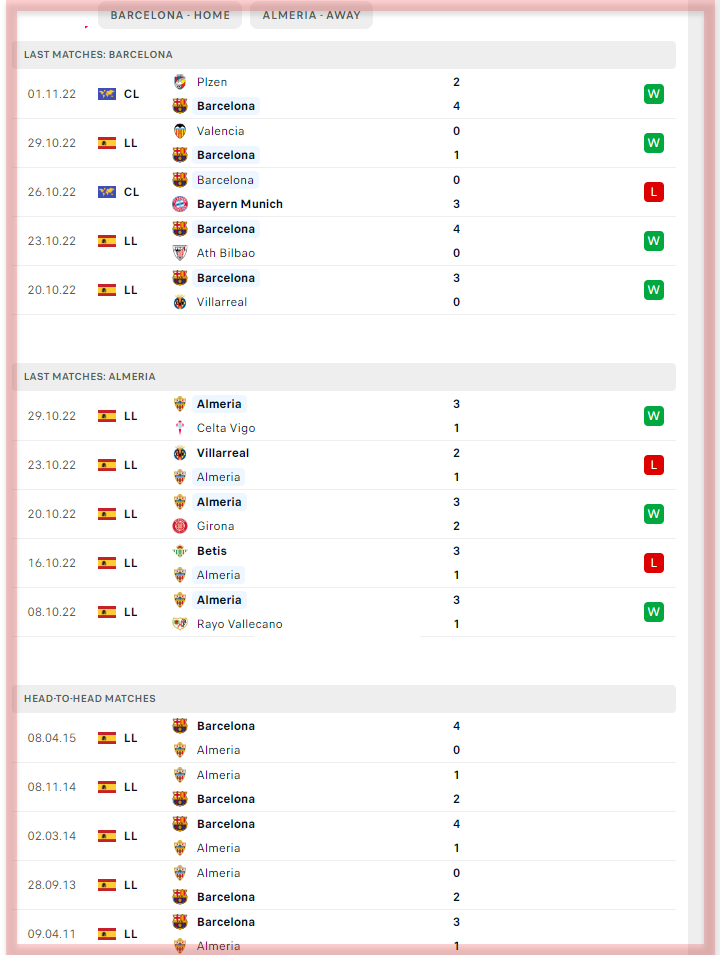