Ajax vs FC Volendam – Ajax enters this contest after a 1-1 Eredivisie draw with Feyenoord. Only Davy Klaassen (71′) was listed as an Ajax player on the scoresheet. For Feyenoord, a goal was scored by Igor Paixo (34′).

Ajax, led by Alfred Schreuder, have scored nine goals in their past six games, for an average of 1.5 goals per game.

After losing to Excelsior in their last Eredivisie match, FC Volendam and its traveling fans will be hoping for a better result in this one.

Damon Mirani (18′ own goal) was the only player from FC Volendam to register a goal. For Excelsior, Marouan Azarkan scored in the 80th minute.

In recent games between FC Volendam and other teams, at least one team usually lost. It has occurred five times in their last six games, according to an analysis.

In those games, FC Volendam scored five goals, compared to 11 goals scored by their opponents.

The final score in the last league meeting between these teams was FC Volendam 2-4 Ajax on Eredivisie Match Day 9 on October 8, 2022. Allard Lindhout was the official referee.

Wim Jonk, the coach of FC Volendam, does not have a full roster to choose from. Ibrahim El Kadiri (Illness) and Francesco Antonucci (unknown injury) won’t be participating.

In our perspective, Ajax can and ought to see a lot of the ball and take advantage of numerous scoring chances. FC Volendam, on the other hand, will find it difficult to get past their defense, but do we see them scoring as well.

Looking at the bookies’ prices in the 90 minute result market, a win for Ajax is best priced at 1.13, a wager on the game finishing all-square is 9.5, and betting on the winning team to be FC Volendam can get you 17. Those are the best returns offered at present. 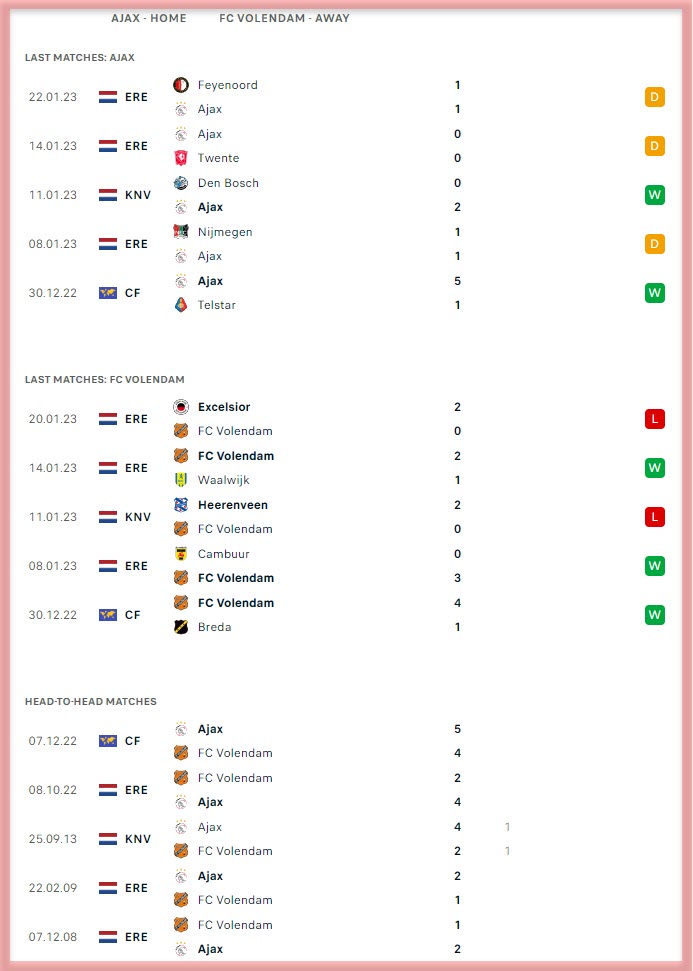