Groningen vs Cambuur – After losing their previous match against SC Heerenveen 3-1 in the Eredivisie, FC Groningen won’t want a recurrence of that performance today.

Recently, FC Groningen games have a tendency to be exciting ones, with lots of scoring being the norm rather than the exception.

A total of 21 goals have been scored over the course of their last 6 meetings (an average of 3.5 goals per game), with FC Groningen accounting for 6 of those goals.

FC Groningen enters this encounter on a two-game league losing streak at home.

SC Cambuur will want to get back on track after losing to Sparta Rotterdam in their last Eredivisie game.

In recent games involving SC Cambuur, at least one team has had a very constant propensity to go scoreless. It has happened five times in their previous six games, according to research.

In these matches, the opposition teams have scored a total of 10, while SC Cambuur has only managed one goal. But perhaps that pattern won’t continue into this game.

SC Cambuur had not won on the road in their previous six league games entering this matchup.

According to a review of their previous meetings, which date back to 12/4/2015, FC Groningen has won four of them, SC Cambuur has won one, and there has been one draw in total.

The two teams combined to score 20 goals during this time, with 12 coming from Trots van het Noorden and 8 coming from Herten. That equals 3.33 goals per game on average.

The score in the last league meeting between these teams was SC Cambuur 0–1 FC Groningen on Eredivisie Match Day 6 on September 11, 2022. Dennis Higler officiated the game as the referee.

Our prediction is that FC Groningen will score and take the lead, making it difficult for SC Cambuur to score goals.

Looking at the betting prices for the match on the 90 minute result market, a win for FC Groningen is best priced at 2.2, betting on a drawn result is 3.44, and taking a punt on a victory for SC Cambuur can get you 3.2. They are the most competitive prices that can be secured at present. 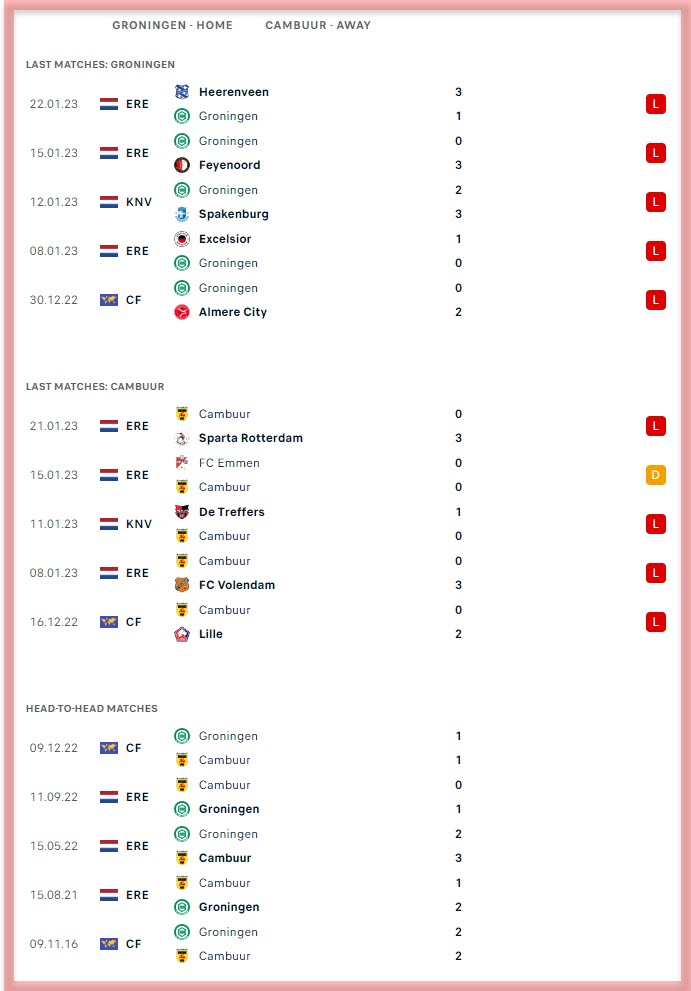