Barcelona vs Real Sociedad – Real Sociedad is currently the most effective team in Spanish football because they have won each of their seven games after the World Cup break.

But on Wednesday night, when they travel to Spotify Camp Nou to play Barcelona in the Copa del Rey quarterfinal, they will face one of their toughest trials yet.

Thus, the seven-game winning streak will be seriously jeopardized this week, particularly in light of the fact that Barcelona has already proven its mettle by defeating Real Betis and Real Madrid in the most recent Spanish Super Cup semifinals.

The Blaugrana had six more victories overall if we take their triumph over Betis on penalties in the Super Cup semifinal as a victory.

It is understandable that Xavi’s team put on lesser attacking performances than other teams in the league considering that Robert Lewandowski had to sit out the team’s previous three La Liga games due to suspension.

But the Polish striker, who will be available against Real Sociedad on Wednesday, was outstanding in matches for the Super Cup and Copa del Rey.

Since they have only given up one goal in their last seven games across all competitions, the visitors largely rely on their impenetrable defense. It will be fascinating to observe how the Basques react to Lewa and crew in this place.

In their last 28 home matches against Real Sociedad, Barcelona has an incredible record of 27 victories and 1 draw.
In August of last year, Blaugrana traveled to San Sebastian for the opening half of the La Liga season and triumphed thrashing, 1-4.

Three of the previous four head-to-head matches were won by Barcelona with the possibility of both teams scoring.

In their most recent games, Real Sociedad and Barcelona both appeared to play far superior defense than offense.

Given the firepower that teams do possess in the final third, we must simply support goals when they cross paths with one another.

We will wager on Barcelona to win & Both Teams To Score at the astronomically high 3.50 odds given Blaugrana’s home record versus the Basques.

Alternately, you can wager on Robert Lewandowski to score at any point at 1.80 odds.

Regarding the latest bookmaker odds on the 90 min. result market, putting your money on Barcelona can be had for 1.62, betting on the game finishing all-square is 4.2 & selecting a victory for Real Sociedad comes in at 5.5. They’re the best of the market prices that can be secured at present. 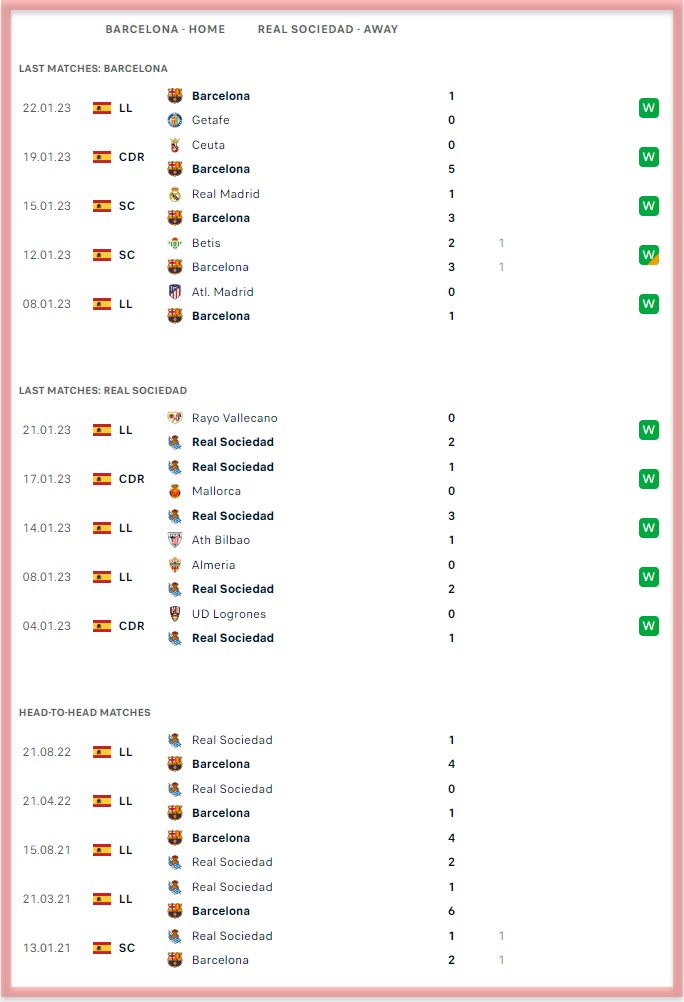