Vietnam vs Oman – preview and prediction

Vietnam vs Oman – Oman is fourth in Group B and has not won in its last four matches. They are only a point behind third-placed Australia and are hoping to reclaim their winning ways.

Vietnam are bottom of the standings and have won their last game following an exhausting run of seven consecutive defeats. With a five-point advantage, the Omanis will travel to My Dinh National Stadium on Thursday to face the Vietnam squad in the ninth round of Asian World Cup Qualification.

Oman is fourth in the standings with eight points after eight games. They won twice and drew once, while losing four times. They have lost twice in their last three matches and are having a difficult season in World Cup Asian Qualification.

The visitors drew their previous game 2-2 with Australia, who are slightly above them in the zone for the World Cup Qualifiers’ Fourth Stage. This result followed back-to-back league defeats to Japan and Saudi Arabia.

Vietnam, on the other hand, is rock bottom, occupying the sixth position on the table with just three points. They won just one of their eight league matches, drew none and losing a whopping seven others. Their overall goal to concede ratio is 7:17, which is the lowest in Group B.

Vietnam ultimately won their first game in the group against China by a score of 3-1, ending a seven-game losing streak. They have conceded ten goals in their last five games while scoring just four.

Previous meetings between the two have averaged four goals, with both teams scoring on a regular basis. Vietnam is in dismal form at home, while Oman is as unimpressive on the road.

We believe that the visitors are small favorites to win this upcoming game due to their previous victory over this opponent. The hosts will need to put up a strong performance if they are to score against an Oman side that we believe will eventually have the upper hand. 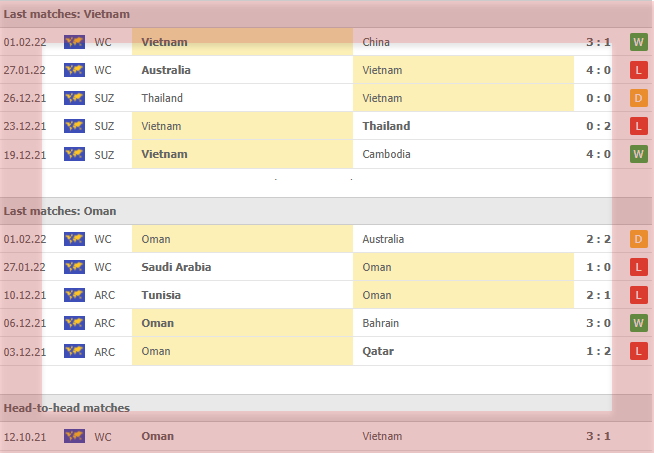