Both teams come into this match on the heels of victories in their previous matches and will be seeking to continue where they left off.

Sparta defeated Willem II 1-0 at the Het Kasteel on Sunday, ending a record of ten games without a win in all competitions. Younes Namli scored the game’s first goal just before the hour mark, giving Henk Fraser’s side all three points in Rotterdam.

De Kasteelheren are still bottom of the Eredivisie standings, but they are now only four points behind safety after their most recent victory. Next up comes a crucial match against an opponent who has only won one of the last nine encounters between the two teams, suffering four defeats and four stalemates in the process.

The visitors won the reverse encounter 3-1 in September and have a chance to accomplish a league double over their hosts for the first time in club history.

With a 1-0 win over Groningen at the Euroborg on Saturday, Fortuna Sittard made it three league wins in a row for the first time this season.

After a somewhat boring first half, the game came alive in the second half, with Dimitrios Siovas scoring a game-winning goal in the 82nd minute.

Sjors Ultee’s team is two points and one spot ahead of their next opponents in the standings, and a win would lift them out of the relegation zone, although for the time being.

Lennart Thy scored in the reverse fixture, although he has only one goal in his last 20 appearances in all competitions. In January, I signed a contract. Younes Namli scored his first goal for Sparta against Willem II last time out, and he’ll be looking to repeat the feat this time around.

Despite making his comeback off the bench in the previous encounter, Benjamin van Leer is unlikely to play, with Maduka Okoye certain to keep his place in goal.

Samy Baghdadi has recently returned from an injury layoff, and the Frenchman could play this weekend after missing the previous six games with a knee ailment.

Forward Zian Flemming, who has three goals in his previous three home meetings for Sittard, is one to watch in the second half of the season. 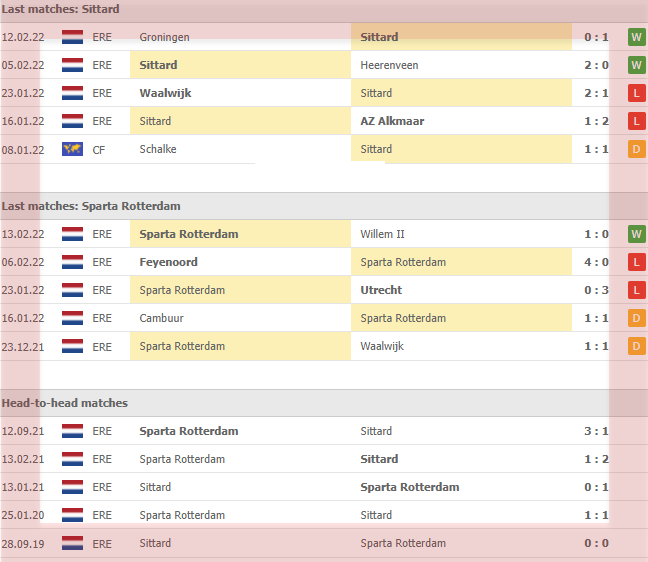