Elche vs Rayo Vallecano – When Rayo Vallecano travels to Elche on Friday night, they will be trying to halt a run of three straight defeats in Spain’s top flight.

The visitors are currently in 11th place in La Liga, with 31 points from their first 23 games, while Elche are in 14th place, five points behind their opponents in this encounter.

Elche’s five-game unbeaten run in Spain’s top division, which included three wins, came to an end last Friday when they were defeated 2-0 by title-chasing Sevilla away from home.

However, their recent good run has propelled them into 14th place in the table, six points clear of the relegation zone, giving them much-needed breathing room at this crucial time of the season.

Rayo’s success this season has been largely due to their outstanding home form, which has seen them finish third in the league behind Sevilla and Real Madrid with 26 points from 12 games.

On their return to this level, the capital club has had a solid season, collecting 31 points from 23 games to rank 11th in the table, just three points behind eighth-placed Athletic Bilbao with a game in hand.

Elche will be without Lucas Boye owing to a muscle problem, while Helibelton Palacios is set to be out due to a hamstring injury suffered against Sevilla last time out.

Due to Palacios’ absence, Antonio Barragan will take over at right-back, but head coach Francisco is expected to resist the temptation to rearrange his lineup for this encounter.

As a result, players like Javier Pastore and Pablo Piatti are expected to return to the bench, with Pere Milla and Guido Carrillo perhaps forming a front two.

In Rayo’s case, head coach Iraola is expected to make changes to the squad that lost 3-0 at home to Osasuna last weekend, with Sergi Guardiola possibly replacing Radamel Falcao at center-forward.

Oscar Trejo is expected to return to the number 10 position for the capital club, while Bebe and Mamadou Sylla are midfield options.

Martin Merquelanz will be out again owing to a knee injury, and Unai Lopez (hip) and Jose Pozo (COVID-19) may also be unavailable for selection on Friday night. 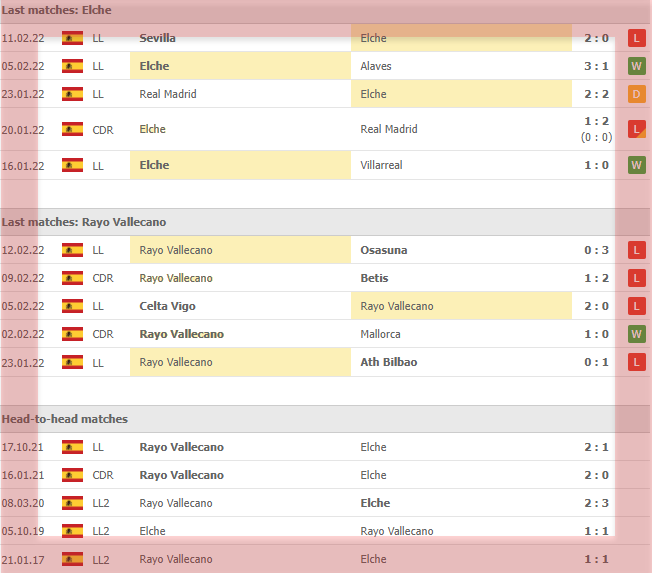