Santos vs Flamengo – Preview, and Prediction

Santos vs Flamengo –Santos took a vacation from their league season, in which they have played 14 games thus far and drawn half of them, to compete in the Copa Sudamericana on Wednesday.

The Sao Paulo team, who had previously won their group, travelled to Venezuela for a first-leg matchup against Deportivo Tachira in the competition’s round of 16.

The Alvinegro have somehow climbed to seventh place in the crowded Brasileiro standings, after being destroyed 4-0 by Corinthians in the first leg of their Copa do Brasil last-16 match at the end of last month.

Expectations are usually high at Santos because they have won the national championship eight times. Despite their recent struggles, they are still only two points off of a spot in the Copa Libertadores for the next season.

After winning 1-0 against Deportivo Tolima in midweek, Flamengo is in good position to advance to the quarterfinals of this year’s edition of South America’s premier club competition.

Fla’s goal was scored in the 17th minute by on-loan Manchester United midfielder Andreas Pereira, and they are returning from Colombia with confidence after a week of back-to-back victories.

Flamengo’s domestic fortunes had taken a worrying turn after they breezed through the Libertadores knockout stages without dropping a match. Five losses in six league and cup games were followed by an overdue 3-0 victory against America Mineiro last Saturday.

The 2019 and 2020 Brasileiro champions are now back in the top half of the unpredictable Serie A standings, but they are still only three points above the bottom-half of the table.

The Rubro-Negro travel to Santos, where they won 4-0 when the teams last played at Vila Belmiro, over a year ago, before attempting to complete the task against Tolima next Wednesday.

Coach Dorival Junior has had a difficult start to his third stint at the club since returning last month, so anything resembling the same outcome this weekend would take some of the heat off of him.

Dark clouds that had been forming around Flamengo have been dispelled by recent results, and the visitors may keep up their momentum by winning three straight games and passing Santos in the standings.

In their last two league home games, Santos hasn’t lost. They only suffered one home defeat all year.
Flamengo, however, has dropped their previous three away games in league play.

They only had one victory on the road this year, and Santos hasn’t defeated them on the road in the previous two league encounters. The most likely outcome in this matchup between two reasonably evenly matched teams would be a draw or home victory. 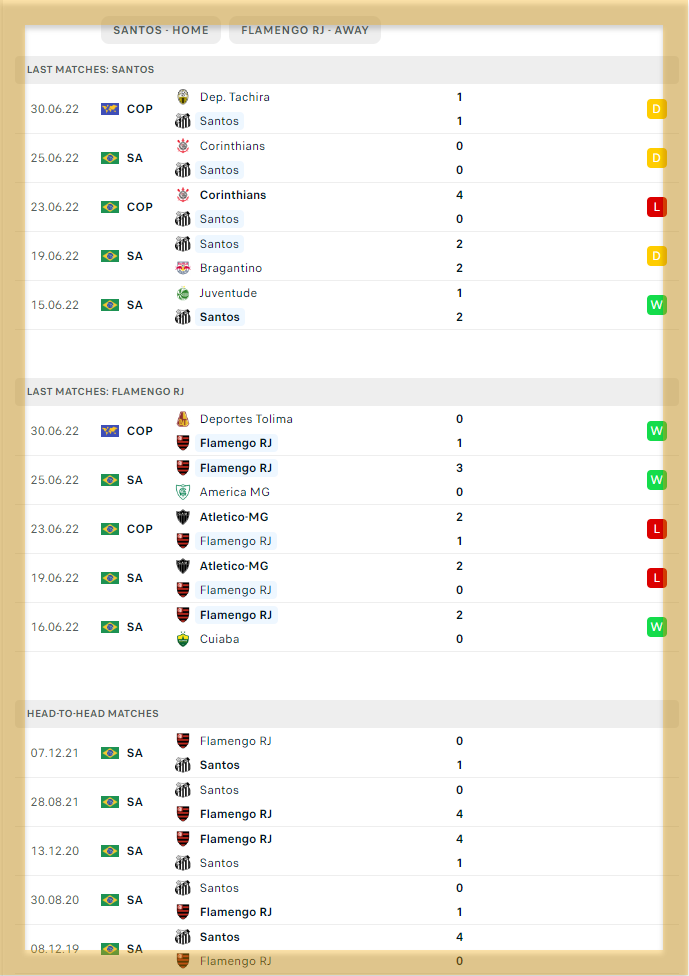