Ceara vs Internacional – Preview, and Prediction

Ceara vs Internacional –Internacional had won all eight of their prior away matches when they arrived in Chile for their Copa Sudamericana last-16 match in the middle of the week. They planned to continue this streak against Colo-Colo.

However, Inter left Santiago trailing by two goals after falling behind as early as the 12th minute. In addition, they only managed one shot on target out of a pitiful five efforts, putting them in severe danger of being eliminated.

The Porto Alegre team, led by former Brazil coach Mano Menezes, is now fourth in the Brasileiro after losing just one of their previous seven league games.

Following last Saturday’s 3-0 victory over Coritiba, they are currently fifth in the table, five points behind leaders Palmeiras, thanks to a prior 16-game unbeaten streak in all competitions.

At Estadio Beira-Rio, where Inter earned exactly half of their points this season, Taison, Edenilson, and Alexandre Zurawski scored the goals. However, Inter is now seeking three more points on the road against a club that has performed well at home thus far.

Similar to their opponents this weekend, Ceara recently had a 12-game unbeaten run snapped—in their case, by longtime rivals Fortaleza in the first leg of their Copa do Brasil last-16 match—but they have since rebounded with a draw and a victory.

The latter occurred in the Copa Sudamericana, where a late comeback saw the Alvinegro defeat The Strongest 2-1 in their first-leg match on Wednesday night.

Now that Dorival Junior has left Ceara for Flamengo, new manager Marquinhos Santos will look to lead his team to their first league victory. Since taking over last month, Ceara has recorded three straight draws in Serie A.

After holding the defending champions Atletico Mineiro to a tie, last week’s 1-1 draw at Castelao against Atletico Goianiense followed a scoreless draw against Cuiaba.

Due to this, tomorrow’s hosts may have moved closer to the relegation zone by a few points, but they are still just six points below the top six in the competitive Serie A standings.

Following the first 14 rounds, both teams are towards the top of the defensive standings, and there is every reason to believe a competitive fight could be in store. Ceara might be frustrated by yet another league draw, but it would be a crucial point against top-six contenders.

In their last six league away games, Internacional has not suffered a loss. They have also not lost any of their previous four head-to-head encounters with this opponent. Additionally, they have lost only once in their last seven road games, making them the third best away squad this season.

In contrast, Ceara has lost all seven of their league games at home. They continue to be the only team without a home victory and are regarded as the worst home team this year. The hosts have also lost their last four league games vs Internacional. 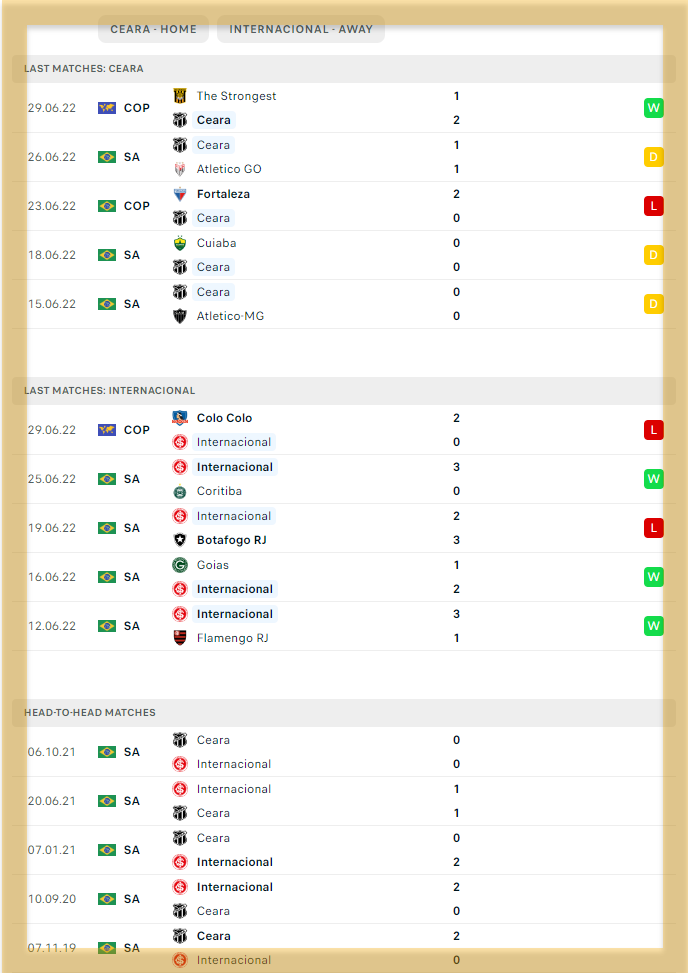