PSV Eindhoven vs Willem II –  PSV Eindhoven requires 5 more points to recover the table top, which has been taken over by Ajax. They’ll face Willem II, the second-to-last team in the league, at Philips Stadion on Sunday. With 71 points from 30 games, PSV sits in second place in the standings. They won 23 games in the league, drew twice, and only lost five times. The hosts are currently on a nine-game unbeaten streak in the league and are in contention for a place in the UCL. To dethrone Ajax, the title contenders need 5 more points.

PSV Eindhoven will be hoping for a repeat of their recent 1-2 league triumph over Cambuur. In their previous six games, Roger Schmidt’s men have scored a total of ten goals. The total number of goals scored against them from the same source amounts to 7  ,Willem II, on the other hand, is in 17th place on the standings with 26 points. They won seven of the 30 games they played, drew five, and lost 18 of the others. They’ve conceded two or more goals in seven of their previous ten away matches, and they’re presently fighting for survival in the second tier.

The visitors are coming off a 1-0 Eredivisie win against Vitesse in their previous match. In recent games featuring Willem II, there has been a continuous pattern of at least one team failing to score. It has happened five times in their last six games, according to their statistics.

PSV Eindhoven has scored multiple goals in each of their last 20 Eredivisie matches, scoring more than once in each of them. They’ve also won their last three home league games at both halftime and fulltime .Willem II, on the other hand, has lost 11 consecutive road matches. They have also failed to score in their past six league away games. 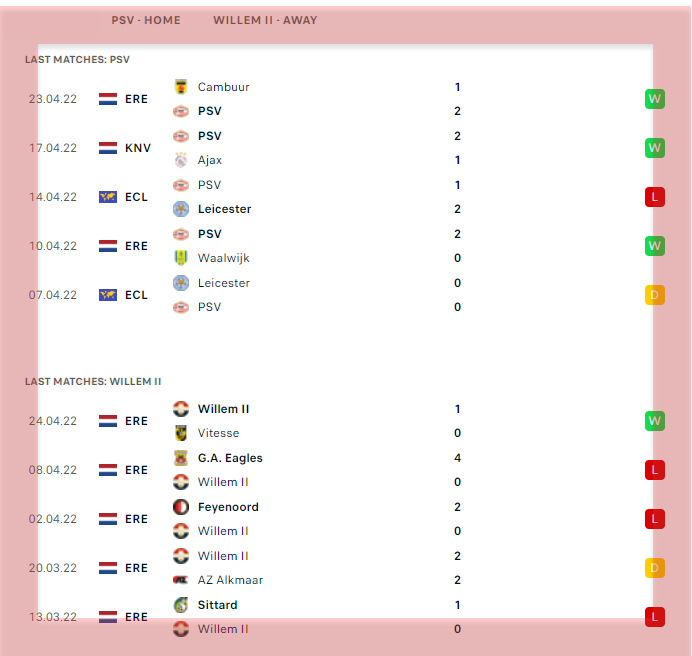