Kayserispor vs Besiktas – Preview and Prediction

Kayserispor vs Besiktas – Kayserispor will visit Besiktas, who are on a two-game winless streak in the league, with 8 points and six places between them. This Sunday, these two teams will meet at Kadir Has Stadium. With 51 points after 34 games, Besiktas sits in seventh place in the standings. They were victorious 13 times in the league, drew 12 times, and lost 9 times. The visitors’ defence has to improve, as they have been surrendering goals recently. They’ll be mostly focused on securing a European spot before the season’s end.

Last time out, the visitors were humiliated by Kasimpasa, who defeated them 3-0 at home. They’ll have to strengthen their offensive if they want to win this game, as they haven’t scored in their last two visits here. Kayserispor, on the other hand, sits in 14th place on the standings with 43 points. They won 11 games out of 34 total, drew 10 times, and lost 13 times. Their troubles on the defensive end of the field, where they have conceded 55 goals so far, have also been a major reason.

Last time out, Kayserispor pulled off a massive upset by holding Antalyaspor to a 1-1 draw. They haven’t displayed much defensive toughness in recent games. In reality, the hosts have allowed 13 goals in their last six games due to their inability to stop opponents from scoring.

Besiktas has recently loved playing away from home, going undefeated in two games. They even won the rematch in the league by a score of 4-2. Meanwhile, Kayserispor has struggled in front of goal recently, with the team failing to score in two of their past five games. In addition, they have lost three of their past four home games. 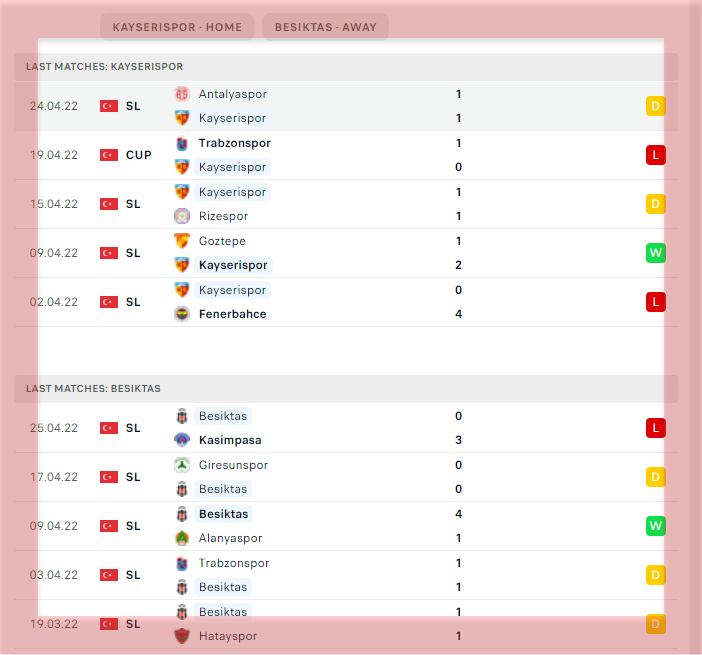