Osasuna vs Sevilla – Osasuna and Sevilla may both be pleased with their quarterfinal Copa del Rey draw because they avoided playing the nation’s top teams at this stage of the competition.

After a 2-2 draw away at Estadio Benito Villamarin, Osasuna eliminated Sevilla’s fierce city rivals Real Betis on penalties to pull off the biggest upset of the previous round.

Generally speaking, Osasuna is having a fantastic La Liga season. They now hold down the lofty seventh spot in the league standings.

With six victories in nine league games for head coach Arrasate and his team at Estadio El Sadar, they are very difficult to beat in Pamplona.

Thus, despite the reputation Sevilla has developed over the past ten years, it is not surprising to see the hosts as modest favorites to win this tie.

Los Rojiblancos have spent the whole first half of the season fighting for their lives in the relegation zone, thus this reputation doesn’t mean anything to them this year.

With a crucial 1-0 victory over their direct rivals Cadiz on Saturday night, Jorge Sampaoli’s team left the danger zone.

In a somewhat dull contest with little chances at either end, Ivan Rakitic’s late penalty kick proved to be the game’s deciding factor.

In the past three head-to-head matches, the teams have each recorded a victory, a draw, and a loss.
At the first half of the La Liga season, Osasuna defeated Sevilla 2-1 in Pamplona in August.
In 23 road games versus Osasuna, Sevilla has only recorded 4 victories.

Sevilla have a dreadful record in Pamplona. They have been struggling badly to get things going ever since the start of this season. Sampaoli’s troops did not shine in the recent matches either, despite getting the narrow victories.

Osasuna have been great at Estadio El Sadar since the start of the season and we will back them to see off Sevilla in a low-scoring match here. Osasuna to win & Under 2.5 goals FT is paid at the 4.33 odds.

Checking the latest betting odds for this match in the WDW market, a win for Osasuna is best priced at 2.34, a bet on the draw is 3.22 & selecting the win for Sevilla is 3.2. These are the best of the returns that can be secured at present. 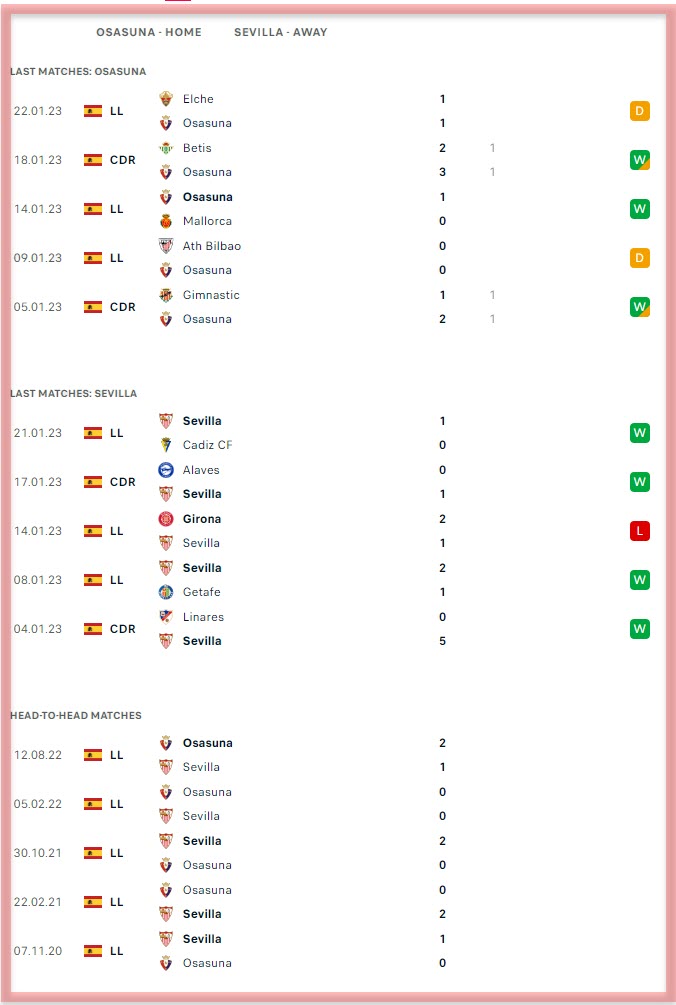