Monza vs Verona – Preview, and Prediction

Monza vs Verona –When teams like Monza and Verona face off against one another in a match that is crucial for both squads, the stakes will be high.

Monza has lost 8 of its 12 games this season, although they are still not worse than Verona, which has now lost 9 games (more than any other elite side) in the 2022–23 Serie A season.

On Sunday afternoon, Verona will visit U-Power Stadium after suffering seven straight league defeats. The team’s board reacted after Gabriele Cioffi was fired midway through last month, but Salvatore Bocchetti’s hiring failed to produce the desired reversal in performance.

Verona’s most recent defeat occurred on Monday night when they lost to Roma at home (1-3). Since no other team in the top division has given up more goals than Hellas Verona’s 24 in the first 12 games, they continue to have the league’s worst defensive record.

Fortunately for Bocchetti, his squad is currently playing Monza, who this season lack a dynamic predator in the last third. Only Stefano Sensi, a midfielder for Monza, has scored more than once this season, with two goals to his credit.

The last time these two teams faced off, eleven years ago, they were competing in Italian football’s third division. In their last 10 meetings with Monza, Verona has generally fared better, going 6 wins, 2 ties, and 2 loses.

In three of the previous four head-to-head meetings between these rivals, the Over 2.5 goals FT & Both Teams To Score prediction came true.

Monza vs Verona – Head -to- Head 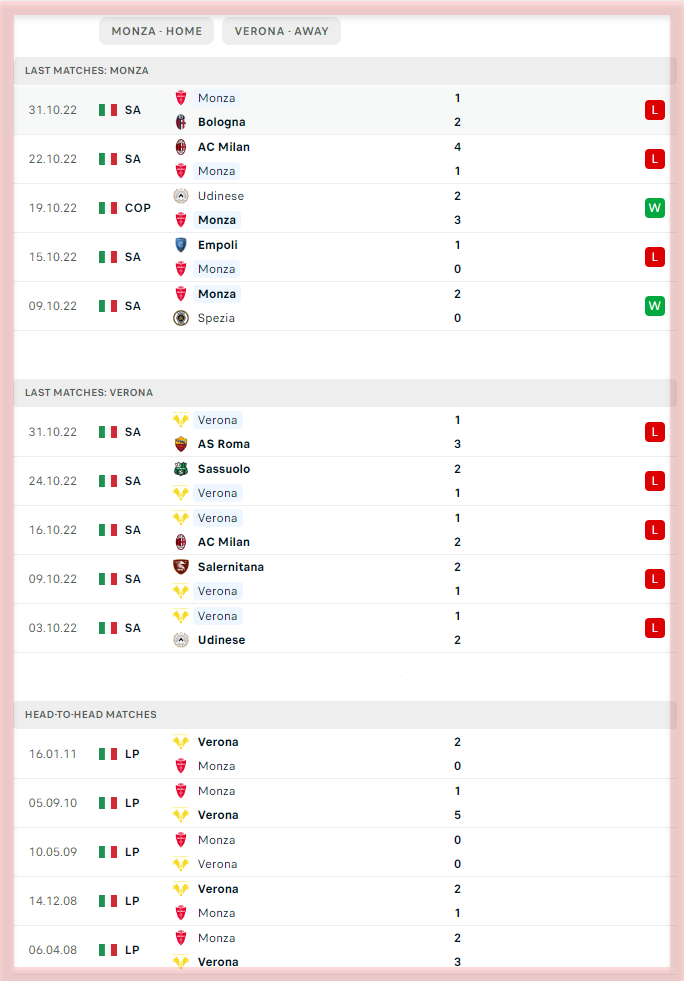