Manchester United vs West Ham – On Sunday afternoon at Old Trafford, the last match of Matchday No. 14 will feature Manchester United hosting West Ham. Following a somewhat slower start to the season, both teams improved in terms of form and confidence in the previous month.

Erik ten Hag appears to have helped Manchester United find their groove. With six victories, three ties, and two losses since the start of the season, they are now sixth in the Premier League standings.

The Red Devils’ defensive play has significantly improved in recent weeks. In their last three league games, they have only given up one goal. Jorginho’s penalty kick was the lone goal last weekend in a 1-1 tie with Chelsea at Stamford Bridge.

In the game against Chelsea, the Red Devils were a considerably stronger team on the field. On that particular instance, they did not give the opponents much room in the final third.

We therefore think Man United’s odds of keeping a clean sheet against West Ham, who have only scored three goals in six away games this year, are quite good.

The Hammers picked up three victories in the previous five league rounds by taking advantage of the somewhat lighter schedule in recent weeks. The most recent came as a result of a 2-0 victory over Bournemouth at home on Monday night at London Stadium in the final match of the prior Matchday.

In 65 home games versus West Ham, Manchester United has 46 victories, 10 draws, and 9 defeats. The Red Devils have defeated the Hammers five times in the past six matches. In four of the last five head-to-head meetings between these teams, the final score was 1-0.

In a low-scoring game, everything—including form and tradition—points to the home team winning. At the odds of 4.33, we are quite interested in betting on Manchester United to win and Under 2.5 goals FT.

The Red Devils to win 1-0 at the odds of 8.50 might be worth a shot for the more daring bettor, especially considering this same score was achieved in four of the previous five head-to-head matches. 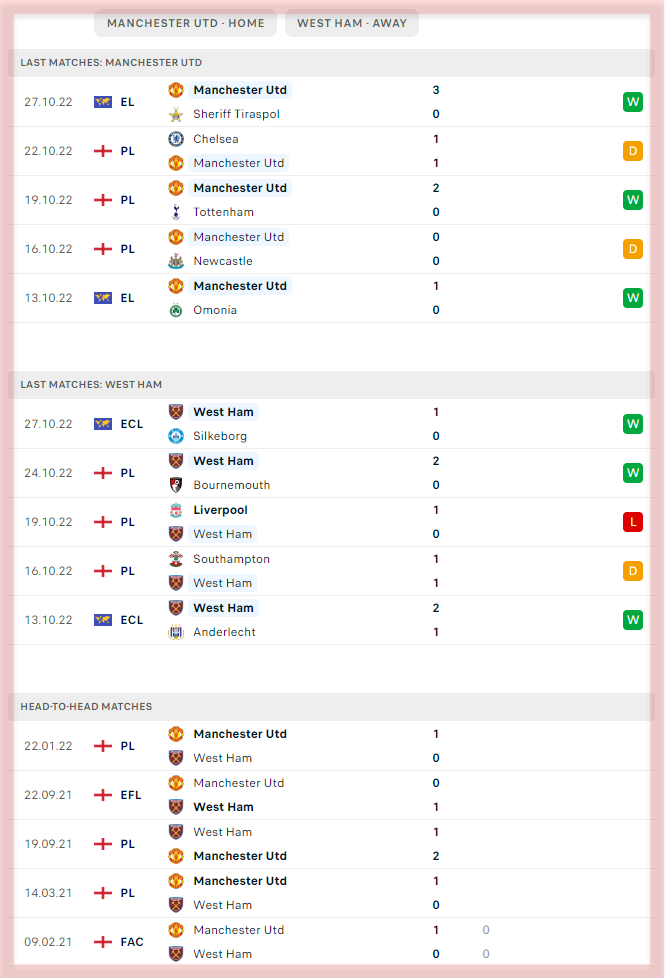