KV Kortrijk vs KV Mechelen – Fans of KV Kortrijk will be hoping for a repeat of their team’s 0-1 First Division A victory over Eupen last time around. KV Kortrijk enjoyed 51% of the possession in that game and 3 of their 13 shots on goal were successful.

Dylan Mbayo (81′) was the lone player for KV Kortrijk to get a goal. Eupen had 17 shots at goal at the opposite end, with 4 of those being on target. KV Kortrijk has recently had severe front-line difficulties.

They have only scored 4 goals against other teams in their last 6 games, according to their “goals for” statistic. In those contests, KV Kortrijk has also had five goals scored against them. Despite that, we’ll simply have to wait to see if the trend continues in this upcoming game.

KV Mechelen will be looking to rebound after losing their most recent match in First Division A play to Seraing. KV Mechelen had 67% of the possession in that game and 5 of their 8 shots on goal were successful.

Yannick Thoelen (22′ Own Goal), Thibault Peyre (27′), and Sandy Walsh (44′) scored the goals for KV Mechelen. RFC Seraing, their adversaries, had 6 shots at goal with 2 of them being on target. Seraing’s goals came from Marius Mouandilmadji (71′, 81′).

Goals have been scored 24 times in the last six games KV Mechelen have played, for an average of 4 goals per match, demonstrating their preference for exciting games. Twelve of those goals were scored by their opponents.

Manager of KV Kortrijk Adnan ustovi is unable to use Abdelkahar Kadri (knee injury) or Jonah Osabutey (abdominal muscles injury). Danny Buijs, the manager of KV Mechelen, does not have access to the entire roster.

We believe that KV Mechelen and KV Kortrijk have a good chance of scoring and ending up with a pretty level match. It might come to a draw. Therefore, we anticipate a close game that ends in a 1-1 draw at the end of regulation. 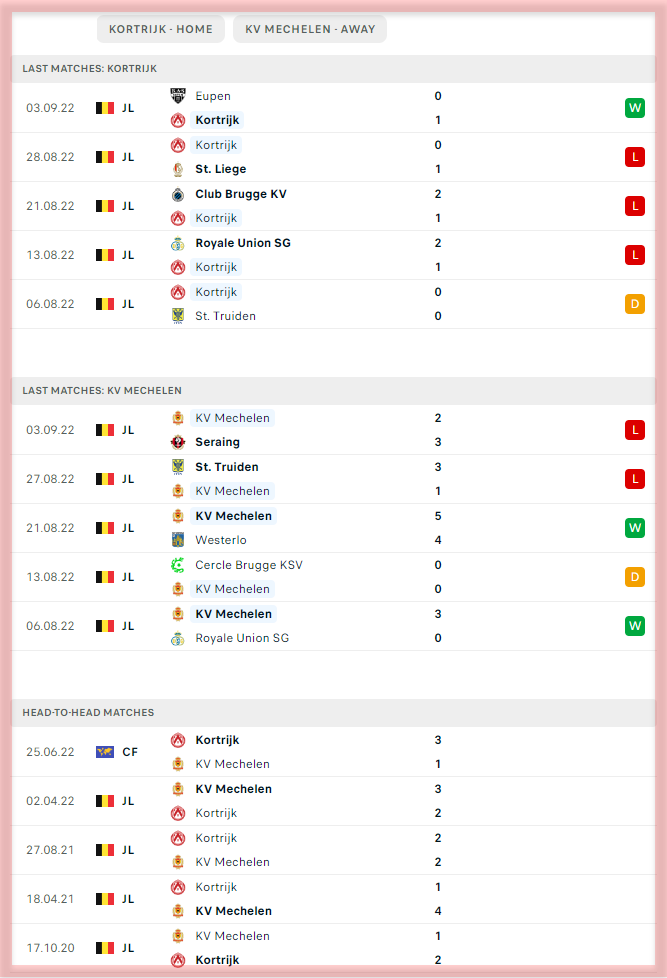