Kalmar vs Djurgarden – Preview, and Prediction

Kalmar vs Djurgarden – Djurgarden is on a four-game unbeaten streak in the Allsvenskan and will look to extend that streak when they face Kalmar at Guldfgeln Arena on Sunday.

With 15 points after nine games, Djurgarden sits in fourth place in the standings. In the league, they won four times, drew three times, and lost twice.

Their overall goals against ratio is 16:7, indicating that they have a strong offensive and defensive line. The visitors enter the encounter on the back of a 4-0 league victory over Malmo in their previous fixture.

Because their defenders have been strong in recent games, they have only given up 4 goals in their last 6 games. Their own forwards scored 11 goals in the time frame.

Kalmar, on the other hand, is in 9th place on the standings with 12 points. They each won four games out of the eight they played. Since the start of the season, they have a 23:30 goal-to-defence ratio in the league.

The hosts score goals, but they also surrender goals, implying that some defensive modifications are required. Following a 1-3 league setback to Hacken in their previous game,

Kalmar will be looking to get back on track here. Henrik Rydstrom’s team has scored 8 goals in their last six games, giving them an average of 1.33 goals per match.

Kalmar has had inconsistent outcomes at home, winning and losing games in a variety of ways. They have won and lost twice in each of their four home games so far.

They are also winless in their last six league matches versus Djurgarden. Meanwhile, Djurgarden has won the last eight head-to-head competitions.

Despite playing four games on the road this season, they have yet to win on the road. They have, however, won the last six away h2h meetings with this opponent. As a result, we expect an away victory on Sunday.

Kalmar vs Djurgarden – Head To Head 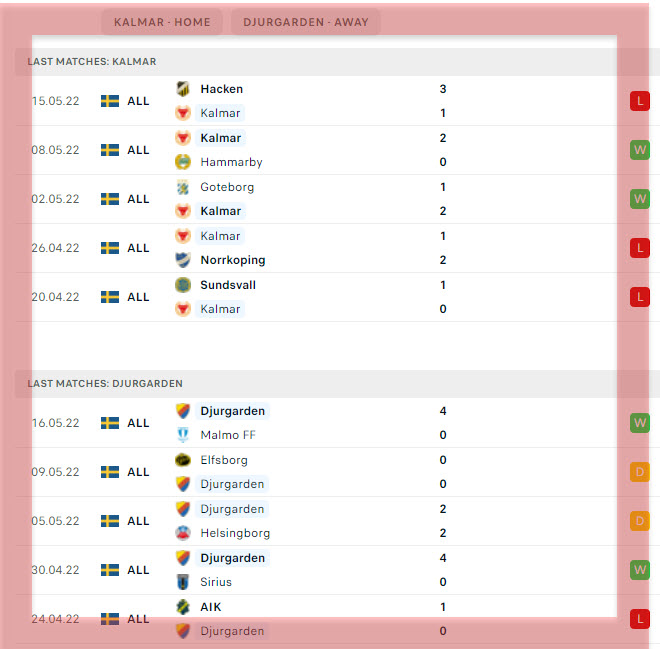