Istanbulspor vs Fenerbahce – Preview, and Prediction

Istanbulspor vs Fenerbahce – At Necmi Kadioglu Stadium on Sunday, Istanbulspor, a home team, will take against Fenerbahce, a visiting team. Istanbulspor finished fourth in the second division the previous season, earning them a promotion to the top flight. However, they got off to a terrible start this season. They have only managed two victories since rejoining Turkish football’s top division.

Additionally, their defense is weak, having allowed a total of six goals in their last three games. In a commanding manner, Fenerbahce took the second spot on the previous Super Lig standings. They had scored the most goals in that season, ignoring the top scorers.

From where they left off in the previous season, they have continued. They are actually playing exceptionally well so far this season. In the past two weeks, they have won every game they have played. Jesus can be pleased with the season-opening efforts of his team’s offensive line. Enner Valencia, their Ecuadorian striker and the league’s leading scorer at the moment, will be in the spotlight for him.

Additionally, Fenerbahce had the HT/FT option in half of the games they played this season. There is nothing wrong with anticipating these patterns when they take on Istanbulspor, who are now in 18th place, on Sunday. When they play the current table toppers on Sunday, the hosts, who have yet to win at home since the start of this season, will be in the lowest of moods.

The visitors have a wonderful opportunity to continue their winning streak in this game. In addition to predicting their goal-scoring team, which includes Enner Valencia, to Score Over 2.5 Goals at 2.62 odds, we like to support the HT/FT: Fenerbahce option at 2.25 odds.

Istanbulspor vs Fenerbahce – Head To Head 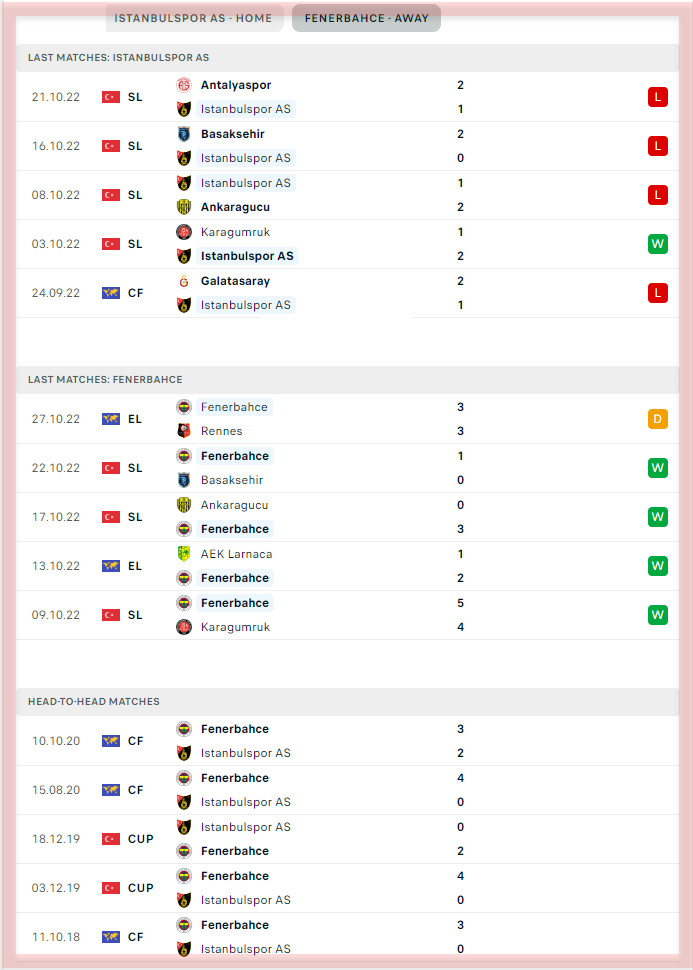