Independiente vs Deportivo La Guaira- The start of the group match for Independiente was not promising. They were at the bottom of the standings at the start of the season after losing their first match. They have, nevertheless, succeeded in changing into a heavy form by winning consecutive competitions.

Independiente won 0-4 on the road against General Caballero in their most recent Sudamericana match, continuing a string of three consecutive triumphs in the competition. They will undoubtedly hope to make it four.

Deportivo La Guaira, on the other hand, has had an ordinary start to the season. Instead of improving their form, they became terrible, posting winless performances. This Sudamericana season, they have yet to win. Their dismal performance has brought them down to third place in Group G.

Guaira was defeated 3-0 on the road by Ceara in their most recent Sudamericana match. With that setback, they have now lost three consecutive games in the competition. Following such a set of recordings, they won’t be in good spirits.

Their first ever meeting took place at the group stage of this season’s competition. Independiente won the rematch 0-2 in the reverse fixture.

Indepenidente’s current winning streak is reason enough to bet on them to win. Their recent home form appears to be adequate. In all competitions, they have gone undefeated in their last five home games.

Deportivo La Guaira, on the other hand, is having a poor road record. In all competitions, they have gone winless in their last five road games. Their most recent road group match also resulted in a demoralising 3-0 loss.

According to the current state of affairs, we believe Independiente will win comfortably against Deportivo La Guaira on Thursday. 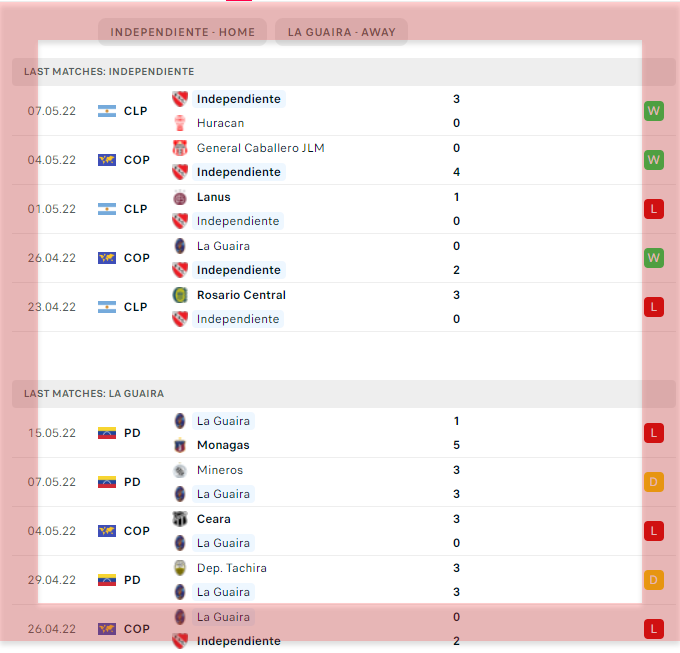