LDU de Quito vs Defensa y Justicia – LDU de Quito had had a disappointing start to the season. They didn’t lose heart just because they were down at the start. Instead, they rebounded with a flurry of positive recordings, climbing to second place on the leaderboard.

LDU Quito and Atletico GO are tied for first place in Group F with the same number of points. They won 1-2 on the road against Antofagasta in their most recent Sudamericana match, continuing a run of three consecutive victories in the competition.

Meanwhile, Defensa y Justicia had started the Sudamericana season on a high note. Anyway, they deteriorated afterwards, reflecting the exact opposite of Quito’s outcomes. They have three points and are presently in third place on the rankings.

In their most recent Sudamerica match, Defensa y Justicia lost 3-2 on the road to Atletico GO. They have now lost three consecutive games in the competition as a result of the aforementioned defeat.

This is only the second time LDU de Quito and Defensa y Justicia will face off. The reverse fixture, their only head-to-head meeting, concluded in a 1-2 win for LDU de Quito.

LDU de Quito’s recent home form has been outstanding. In all competitions, they have gone undefeated in their last 11 home games. Their only home group stage in this competition concluded in a highly motivating 4-0 victory.

On the other hand, Defensa y Justicia are struggling on the road. In all competitions, they have lost three of their last five road games. Their most recent group stage match was a 3-2 setback away from home.
Based on the information above, we believe LDU de Quito will win at home against Defensa y Justicia in a Libertadores match. 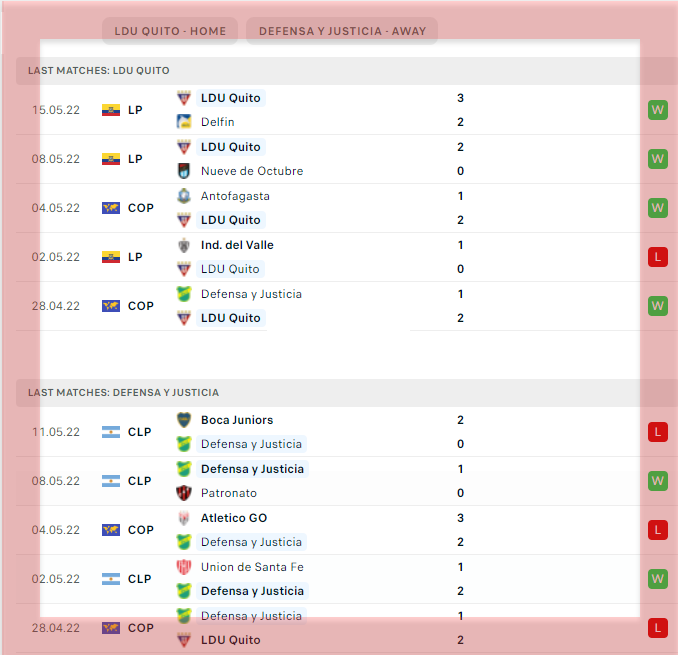