HJK vs Roma – Preview, and Prediction

HJK vs Roma – On Thursday, Roma will come at Bolt Arena to play the hosts of the Europa League match, HJK. The host is unimpressed by the most recent form. In their last three league games, they have gone winless.

This setback has made it more difficult for them to close the gap with KuPS, who are currently in second place. Further, HJK is presently in last place in Group C. They have a goal-scoring offence, but it has only produced one goal this year.

Their chances of winning will be hampered by their weak attacking line and the nature of the competition. They have been continuously giving up goals recently, and they fell to Roma in the rematch by a score of 3-0.

Jose Mourinho’s team will enter this match having suffered a 0-1 loss to Napoli, who are now leading the Italian league. Roma hasn’t had any trouble finding the back of the net, scoring in all but one of their last five games—a meeting against Napoli.

This game is anticipated to give Roma the points they ought to guarantee themselves a berth in Group C.  Roma are more likely to secure a victory when the two teams in the bottom spots of the table face off.

In the lone head-to-head game between these two teams, Roma thrashed HJK by scoring three goals without reply. In their last five home games, the hosts have not performed well.

The two home games they played in the Europa League this year ended in losses. Roma has also gone unbeaten in its past four road games. In those four away contests, a strong offensive line can be seen starting to emerge.

The star of the Roma attacking side is Belotti Andrea, who has two goals in his previous four Europa League games. While anticipating a goal from him, we prefer to support Roma to Win & Both Teams to Score as the main wager. 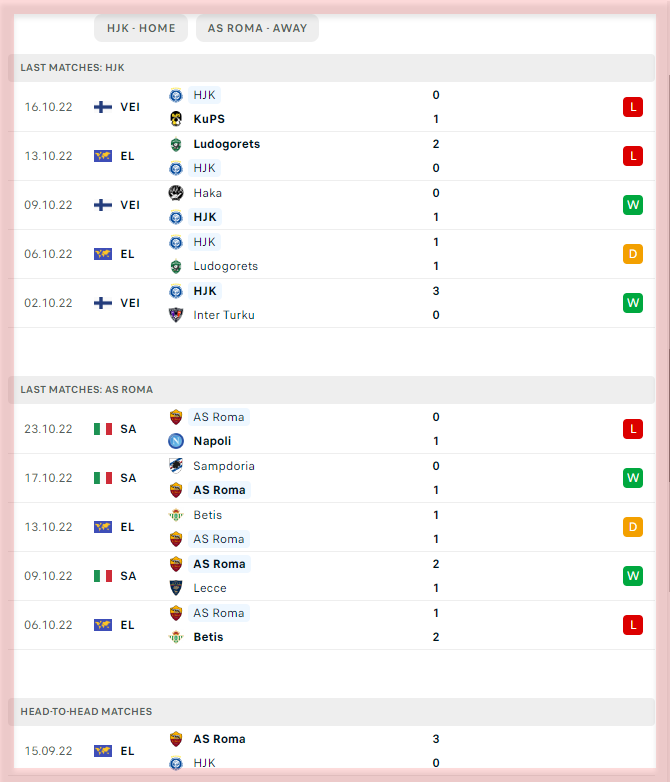