Sturm Graz vs Feyenoord – With only two games remaining, the UEFA Europa League Group F race is wide open as all four teams have five points. Sturm Graz will be seeking retribution when the two teams square off again Tomorrow night in Gameweek 5 after Sturm Graz suffered a crushing 6-0 loss to Feyenoord in the return match in Rotterdam in the second round.

A victory here would put Sturm Graz in a strong position going into their match against Midtjylland in Denmark on the final day. Sturm Graz kept Lazio to consecutive draws in the previous two rounds.

The hosts will approach this match on a high after some impressive performances in recent weeks. They have only suffered one loss all year in the Austrian Bundesliga, where they are currently fourth after 13 games, four points behind leaders and defending champions Salzburg.

Since the aforementioned debacle against Feyenoord in the Netherlands, Sturm Graz has gone nine games without suffering a loss in any competition. They also managed to hold teams like Salzburg to a scoreless draw away from home last Saturday.

On the other hand, Feyenoord enters this match after a discouraging 1-1 tie with Fortuna Sittard over the weekend in Eredivisie play. In the previous six games in all competitions, Arne Slot’s team had won two, drawn four, and only kept one clean sheet.

It would be very intriguing to see if they can recreate the fantastic offensive performance from the first match against Sturm, especially given how much the Austrian team’s defensive play has developed since then.

In the third round of the UEFA Champions League Qualifications 22 years ago, these two teams faced off, and Sturm Graz advanced 3-2 on the strength of a 2-1 victory at home.

As was already established, Feyenoord defeated their opponent 6-0 in Rotterdam in September of this year’s Europa League match. If you enjoy making accurate score predictions, you can try betting on Sturm Graz to win 1-0 at 13.00 odds. 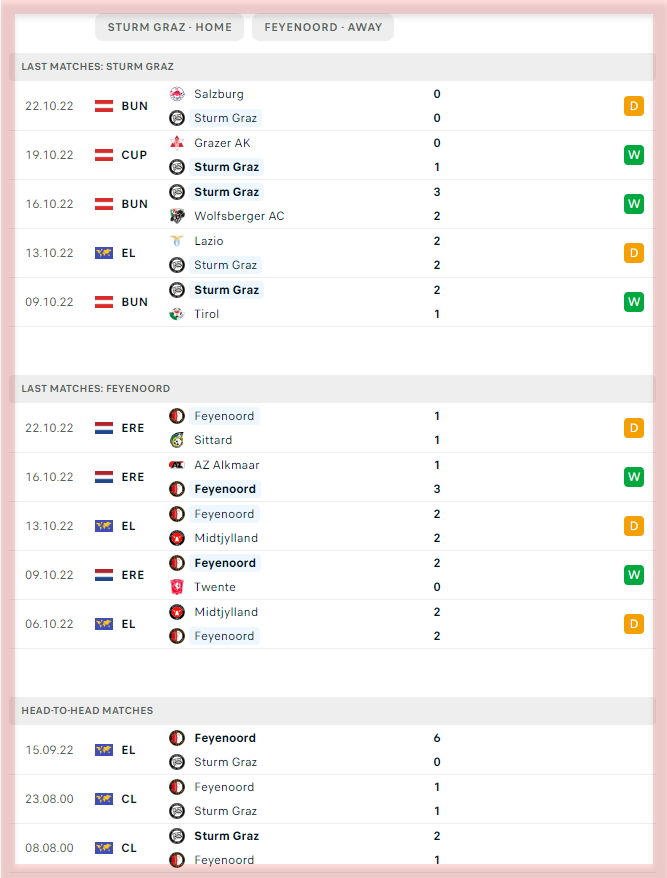