Feyenoord vs NEC Nijmegen – Despite taking an early lead in Rotterdam during the weekend derby against Ajax, Feyenoord was forced to settle for a point.

The team of Arne Slot drew twice in their last three league games, cutting their lead at the top of the Eredivisie standings to just two points.

When mid-table NEC Nijmegen visits Feyenoord on Wednesday night for the competition’s 18th round, there won’t be any room for error. In its past five Eredivisie games, NEC is undefeated.

Since the start of the season, they have only lost three games. At the beginning of the month, Rogier Meijer’s team held Ajax to a 1-1 tie, and in the match after that, they held Vitesse to a scoreless draw away from home.

When NEC Nijmegen easily defeated Emmen 3-1 at home four days ago, they earned their first three points. The fact that NEC Nijmegen has only allowed seven goals in eight road league games this year speaks volumes about their talents.

We must also point out that in their eight home Eredivisie games this season, Feyenoord has only allowed three goals. In eight league games played in front of their supporters, Meijer’s team has five victories, three ties, and an outstanding 17-3 goal differential.

In the second meeting, which took place at Goffertstadion in October last year, NEC Nijmegen held Feyenoord to a scoreless draw.

Prior to this matchup, Feyenoord enjoyed a five-match winning streak over NEC Nijmegen.
In four of the previous five head-to-head meetings between these rivals, three or more goals were scored.

Given that there are now only two points separating the top two teams in the rankings, Feyenoord cannot afford to make a mistake here.

NEC, however, won’t be a simple chore for the hosts, especially with the knowledge that the guests are unbeaten in their next five league games.

At odds of 2.00, we will pick NEC Nijmegen to avoid a loss by two goals or more in goal differential. You can also place a bet on Under 2.5 goals FT at the tempting 2.37 odds.

Our opinion is that Feyenoord can and ought to see a lot of the ball and take advantage of numerous scoring opportunities. NEC, on the other hand, will have a difficult time scoring in this match, but we see them doing so as well.

NEC is one of the Eredivisie’s top clubs right now, so they cannot be completely ruled out of pulling a surprise against the league’s top teams.

Feyenoord have only suffered one defeat in their last 17 league games, though, and we anticipate that record to continue on Wednesday.

Looking at what the bookmakers’ view is of this game on the 90-minute result market, staking on Feyenoord can be had for 1.3, backing a drawn result is 5.6, and putting your money on a victory for NEC gets you 9.3. They are the most competitive returns that can be secured right now. 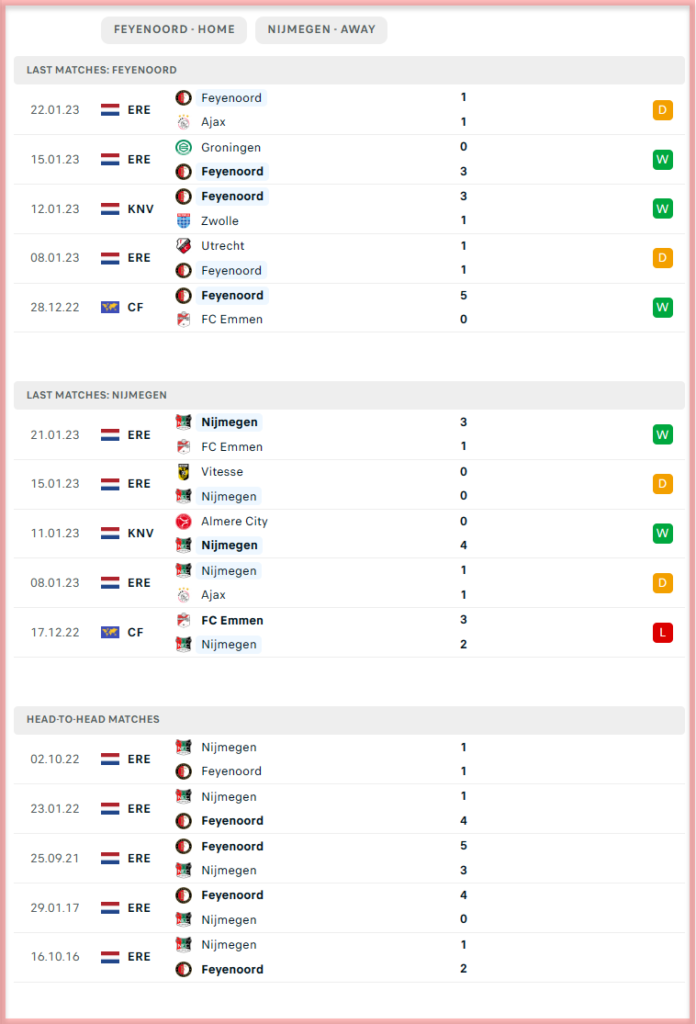