Fortuna Sittard vs Heerenveen – As the Eredivisie heats up, Fortuna appear destined for yet another season of relegation concerns, despite early-season form suggesting something more enjoyable for Julio Velazquez’s team this year.

In October, a late Remy Vita goal against Vitesse at GelreDome stretched Sittard’s winning streak to three games. This victory boosted the team up the Eredivisie standings and had fans wondering whether they could raise their goals for the season.

Since that victory in Arnhem, Fortuna has only won twice in nine league games, and as January draws to a close, they are once again concerned about the danger of being demoted from the top division.

A single point from that group of games means Velazquez’s team is only four points above FC Emmen in the relegation playoff place despite having a less than ideal trio of matches upon their return from the month-long break, facing both PSV Eindhoven and AZ Alkmaar.

Burak Yilmaz, a 37-year-old Turkish striker for Fortuna who has scored in back-to-back games, will be crucial to the club’s efforts to avoid relegation this season after tallying six goals in 14 Eredivisie starts.

Following the World Cup break in November and December, Heerenveen has had a successful start to club activities, keeping their seventh place standing in the Eredivisie and earning their entry into the third round of the KNVB-Beker.

Last time out, Kees van Wonderen’s team defeated Groningen 3-1 thanks to a brace from Amin Sarr and a late goal from Pelle van Amersfoort. This was their first league victory of the year and it increased their lead over the division’s middle pack to five points.

Heerenveen, who are currently in seventh place with 27 points after 17 games, appear set to face off against Utrecht for a spot in the Europa Conference League playoff slots. This will be a pleasant difference from recent seasons in which mid-table mediocrity has become the norm.

De Superfriezen have been reliable on the road thus far this season, collecting 13 points from eight games while giving up just seven goals, the fewest of any other team in the Eredivisie.

Fortuna must win in order to allay their relegation concerns this season, but they will now face Heerenveen, who have so far this year proven to be very difficult opponents on the road.

Before a vital match with Utrecht at the beginning of February, De Superfriezen play Fortuna and Vitesse, two struggling teams. We believe Van Wonderen’s team will be confident of taking all three points from their next matches.

We believe Fortuna Sittard will be able to score against SC Heerenveen, but we doubt it will be as many as they will have conceded to them.

Regarding the current betting odds on the WDW market, putting your money on Fortuna Sittard can be had for 3, backing the game finishing all-square is 3.44 & betting on a win for SC Heerenveen comes in at 2.31. Those are the best of the bets that can be secured as of now 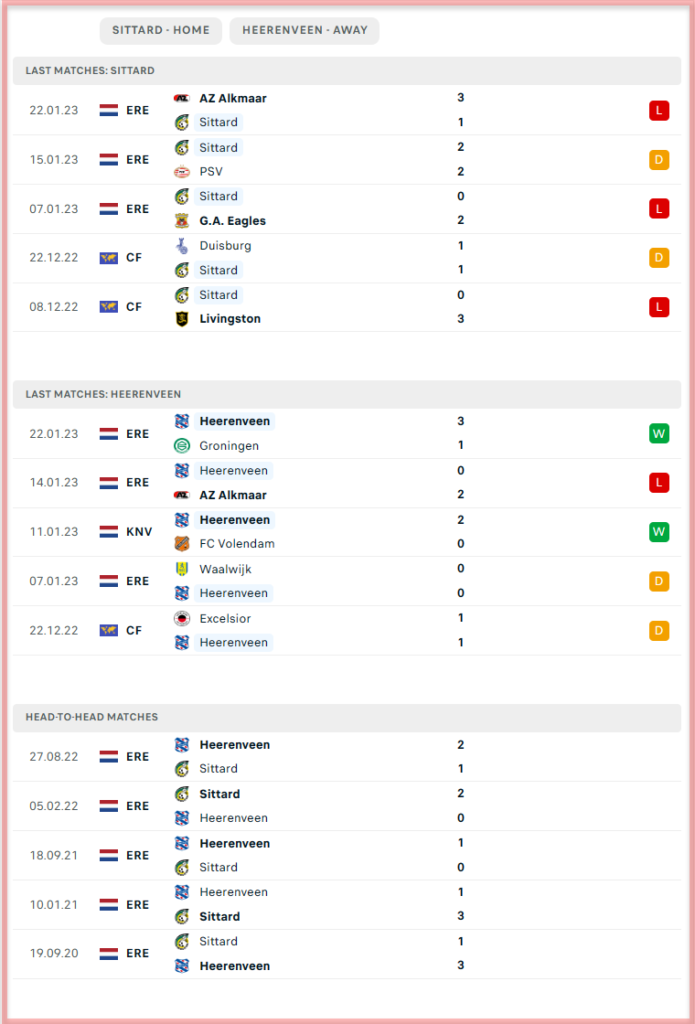