Empoli vs Hellas Verona – Empoli enters this game off of a 1-1 Serie A draw with Lecce. Empoli enjoyed 60% of the game’s possession and 3 of 9 shots on goal that were on target. Fabiano Parisi scored the goal for Empoli (23′).

Five of Lecce’s 15 shots on goal were successful. Lecce’s goal came from Strefezza (40′). Empoli has recently failed to take advantage of its opportunities.

Hellas Verona and their supporters will be hoping for a better outcome this time after a losing effort in their most recent Serie A match against Atalanta.

Hellas Verona had 49% of the possession in that game and 2 of their 14 shots on goal were successful. Seven of the 15 shots on goal for Atalanta were on target. Atalanta scored in the 50th minute with Teun Koopmeiners.

The numbers don’t lie, as Hellas Verona have allowed 15 goals in their last six games while being scored against in six of those contests. In their defence, Hellas Verona absolutely needs to tighten up.

For Empoli coach Paolo Zanetti, Nicol Cambiaghi (hamstring injury) and Lorenzo Tonelli (cruciate ligament injury) will remain out. Gabriele Cioffi, the manager of Hellas Verona, does not have a full roster to choose from.

Both Davide Faraoni (unknown injury) and Roberto Piccoli (biceps femoris muscle injury) are unable to participate. It’s difficult to predict a victor in this match between Hellas Verona and Empoli, although both teams have a chance to score.

We’ll see, but it appears that this could be settled evenly. So when the referee blows the full-time whistle, we expect a very tight game with a score of 1-1. 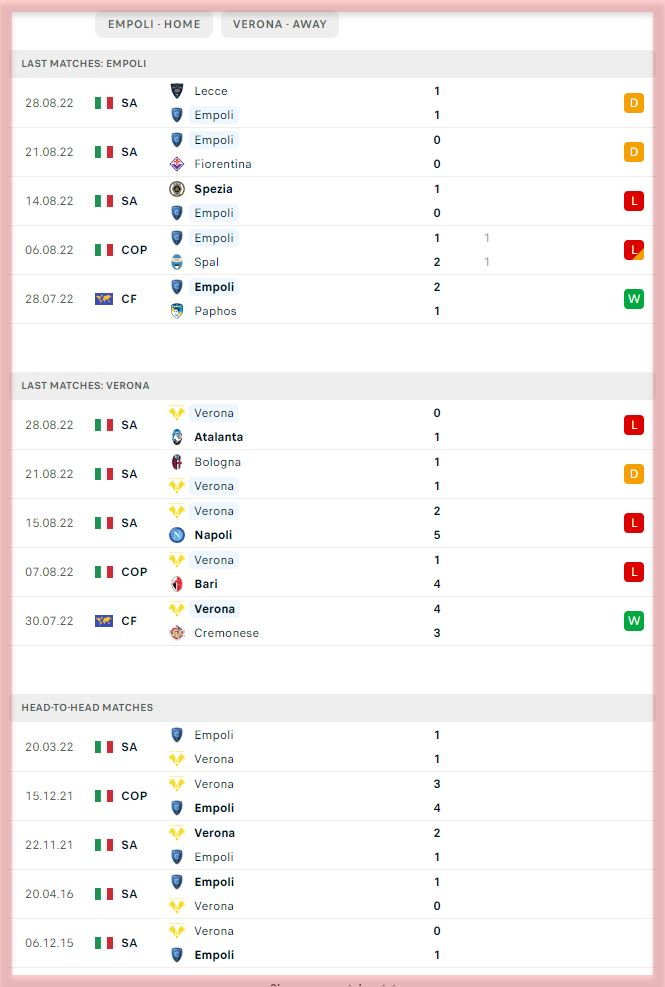