Cuiaba vs. Racing- Preview And Prediction

Cuiaba vs. Racing- Racing Club will play Cuiaba in the fourth round of the Copa Sudamericana. They need to win all three points to keep their chances of making the next round alive.
When Racing lost their unbeaten season and also their winning streak, they haven’t looked like they used to. It’s still true, though, that they have a playoff spot. They can now focus on the continental tournament. We think Racing will use their style of play to control the Brazilian team and win the game. This is what we think will happen.
After seven games, Cuiabá has only scored five goals. In none of those games did they score more than one goal. So, in fact, the Brazilians couldn’t score when they played the other team before.

In their first three games in the South American Cup, the guests have only let in one goal. This is a sign of how strong their defense is. Cuiaba is not a high-scoring team, even though they play at home. They will have a hard time scoring against Fernando Gago’s team.

They played each other on Saturday and the game ended in a 1-1 tie, which is what happened. It was Jorginho’s goal that gave the visitors a 1-0 lead at the end of the first half. Rodriguinho scored for the home team in the 81st minute to make it 1-1, but it was not enough.

A fourth-place finish means Cuiabá is a few points behind the first place team. After the game, they have to turn the page so they can move up in Group B of the Copa Sudamericana.

La Academia did not win, but at least they were able to keep their unbeaten record in the Professional League Cup alive. A 1-1 draw with Banfield was made when the match was almost over.

It was not an easy game for Fernando Gago’s team. They used a mix of starters and subs because they were going to Peru this week. However, they are still the leaders and have already made it to the quarter-finals, so they will be there.

Cuiaba vs. Racing – Head To Head 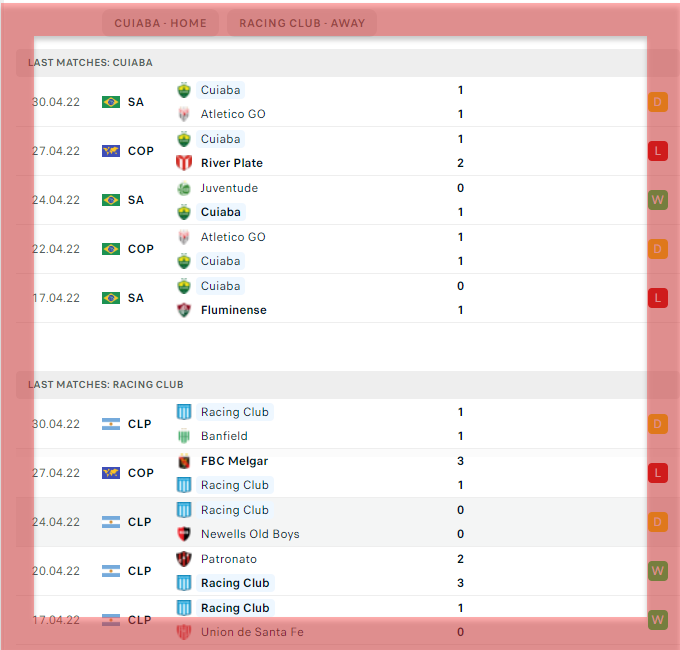