It’s reasonable to suppose that Scott Parker and his team will wish to forget about their FA Cup loss to Boreham Wood of the National League.

Boreham Wood won a dramatic cup upset at the Vitality Stadium on Sunday thanks to a goal from Mark Ricketts.

The Cherries will not have much time to reflect on their defeat, as they return to league play on Wednesday, hoping to win at home for the first time this season.

Bournemouth are in third place, just a point behind the automatic promotion places, with two games in hand over second-placed Blackburn Rovers.

Birmingham sits in 18th place, although they have a 13-point cushion between them and the relegation zone.

Despite the fact that relegation is unlikely, Lee Bowyer will be concerned that his team has only won once in their previous ten league games.

Following two 2-2 draws in a row, Birmingham were defeated 2-1 by Sheffield United at St Andrew’s on Friday.

In that match, Lyle Taylor put the Blues ahead in the 61st minute, but that lead lasted only three minutes as Billy Sharp leveled the score before Sheffield United’s Jayden Bogle scored the game-winning goal.

A number of first-team regulars were rested on Sunday, and Parker is expected to make several changes from the side that faced Boreham Wood in the FA Cup fourth round.

Freddie Woodman, Nat Phillips, and Todd Cantwell all made their Cherries debuts against Boreham Wood, and the trio might all start Wednesday’s match.

Both Siriki Dembele and Kieffer Moore joined Bournemouth in January, and both might start against Birmingham on the bench.

Taylor, who joined on loan from Nottingham Forest, has already made an impression on the Birmingham fans, scoring in both of his first two outings for the Blues.

Despite the loss to Sheffield United, Bowyer may choose an unchanged lineup for Wednesday’s trip to the South Coast. 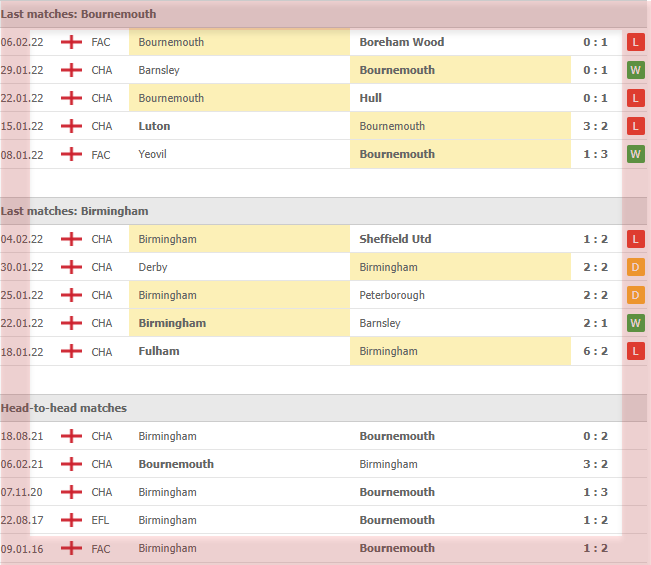 Even if Bournemouth’s form has fallen in recent weeks, we believe they have enough quality in their squad to defeat a Birmingham side that struggles on the road.