Borussia Dortmund vs Bayer Leverkusen – We have a massive matchup between two of the Bundesliga’s titans on the very first matchday of the season.

This Saturday, Borussia Dortmund will play host to Bayer Leverkusen, and both teams will be aiming for a win in this season-opening match.

The previous season, Borussia once again let the Barbarians win the championship. However, it should be noted that Der BVB had the most goals scored without Bayern there and would have been the competition’s clear top team had Bayern not participated.

As time goes on, Dortmund is being put to the test. It will be interesting to watch how effective their offence will be without their great scorer Erling  Haaland this time around in the German top division.

But the squad has sold top players before, and it is expected that they will continue to function normally. With the addition of the Bavarians, these three teams were the best in the Bundesliga previous season,

slightly ahead of Leverkusen, who came in third place. Keep in mind that only these three teams scored 80 or more goals during the competition.

Additionally, the majority of head-to-head matches between these two clubs throughout the years have seen plenty of goals scored between them, so based on all of our findings, we can anticipate a high-scoring match this weekend.

The BVB had produced 6 victories while remaining unbeaten in 7 of their previous 9 games overall. Keep in mind that they had a 5-match winning streak going during this time as well.

Leverkusen, on the other hand, enjoyed a winning streak of four games and had gone undefeated in seven of their previous nine games overall.

These findings, along with recent head-to-head scorecards, suggest that goals will be scored frequently between these two clubs this weekend. Whlie Both sides scored in each of the previous five meetings.

3 or more goals were set for each of the previous nine meetings. And The most recent game played here had resulted in a 2-5 victory for the guests. 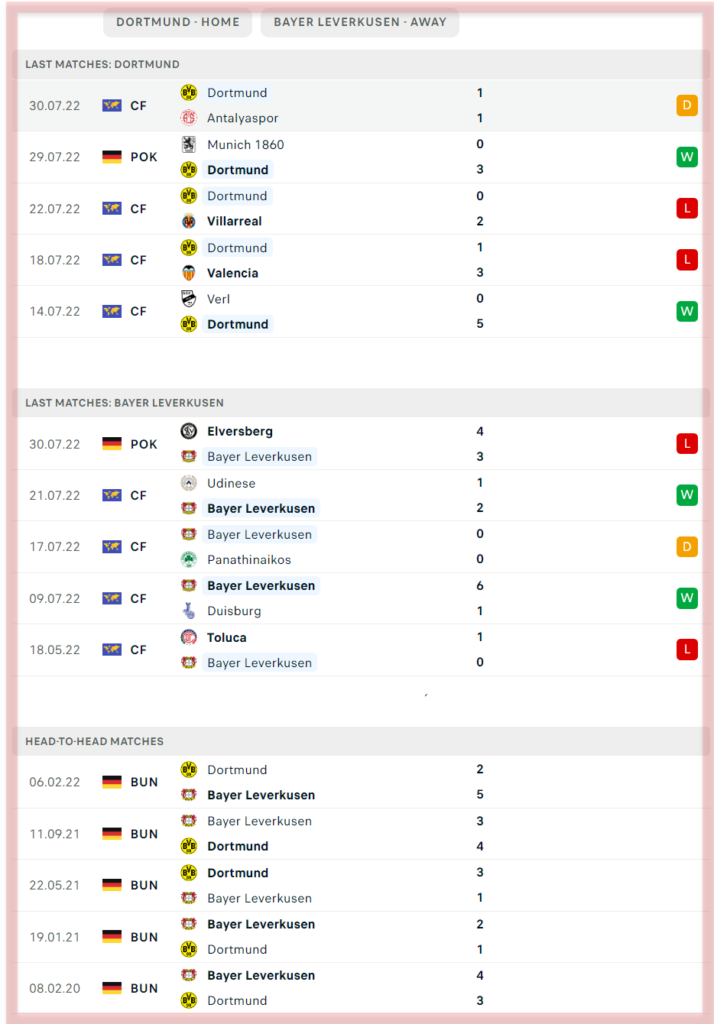