Bochum vs Mainz 05 – Preview, and Prediction

The teams split the wins with one victory each in the previous season, but in May, the visitors finished five spots ahead of their hosts despite a dismal away record.

Last weekend, Bochum prepared for their second season back in the big leagues by cruising to a comfortable cup victory. This came after a demanding preseason schedule that began at the end of June.

Viktoria Berlin, who competes in the Regionalliga Nordost and only earned a spot in the DFB Pokal by winning the regional Berlin Cup, was defeated by the visitors by a score of 3-0 after just 30 minutes.

Recent friendly victories over Serie A teams Lecce and Spezia also offered hope, and Bochum’s preseason campaign came to an end with a 6-2 thrashing of Antalyaspor.

Last season, Thomas Reis led Ruhr out of the Bundesliga’s bottom three for the first time in 11 years. With a 13th-place result, they weren’t in the bottom three.

Last Sunday, Mainz travelled to the east to take on third-tier Erzgebirge Aue, and they won 3-0 to get their competitive season off to a successful start in their most recent effort to reach a first-ever Pokal final.

Bo Svensson’s club, which finished eighth last season, had a mixed preseason, beating Newcastle United despite fan hostility due to the Toon’s ownership, losing to Besiktas, and being held at home by Athletic Club.

The Mainz management wants a great start. Jacek Goralski, Jannes Horn, and Danilo Soares will miss the start of the 2022–23 season for Bochum.

Left-back Horn, a teammate of the latter who is out with a hip issue, will also be unavailable because he tore a thigh muscle in the DFB-Pokal not long after moving from FC Cologne.

Konstantinos Stafylidis has resumed training and might play left wing in a 4-2-3-1 system; Philipp Hofmann, a former Brentford striker, could start up front. Saidy Janko filled in last week.

Since Moussa Niakhate left in the summer, Mainz must also adjust their defensive line. Anderson Lucoqui or Maxim Leitsch, a former Bochum player, might play left back. 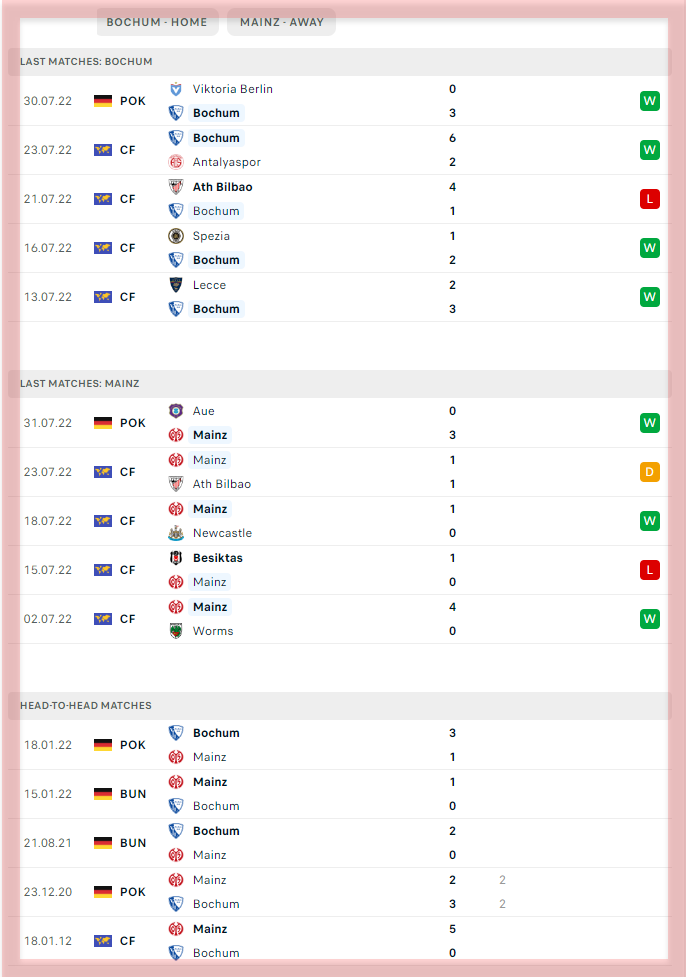