In that game, Bayer Leverkusen had 40% of the possession and 3 of its 13 shots on goal were successful. Mitchel Bakker (21′), Amine Adli (43′), and Nadiem Amiri (67′) scored goals for Bayer Leverkusen.

The Bayer Leverkusen team of Xabi Alonso has managed to score 12 goals in total during their last six games, giving them an average of 2 goals per game.

VfL Bochum enters the contest fresh off a 3-1 victory against Hertha Berlin in their previous match of Bundesliga 1.

VfL Bochum has scored at least three goals in five out of the past six games. The overall average throughout that time was three goals per game, with VfL Bochum scoring 1.33 of those goals on average. We’ll have to wait and see if this game will maintain that trend.

In the previous four league games against Bayer Leverkusen, VfL Bochum had lost every time they had faced them away from home. They’ll want to put a halt to this run.

In their previous meetings, which date back to September 27, 2008, Bayer Leverkusen has won three of them and VfL Bochum has lost none, while three of the games have been drawn.

In total, 13 goals were scored in these matches between the two teams, with Leverkusen scoring 8 and Bochum scoring 5. That equals 2.17 goals per game on average.

The last league meeting between these teams was on Bundesliga 1 Match Day 29 on April 10, 2022, with the final result being VfL Bochum 0-0 Bayer Leverkusen.

At that point, VfL Bochum had 41% of the ball and made 12 attempts at goal, scoring on none of them.

Bayer Leverkusen, on the other hand, made 9 attempts at goal, with none of them succeeding. Felix Zwayer served as the referee.

In our opinion, Bayer Leverkusen will almost certainly have a high number of shots on goal and convert on them. However, despite our belief that it is likely that they will score here as well, VfL Bochum may find it difficult to score.

Regarding the latest bookmaker odds in the full-time result market, victory for Bayer Leverkusen is available for 1.44, betting on a drawn result is 4.75 & putting your money on victory for VfL Bochum gets 6.9. These are the most competitive market prices being offered at the moment. 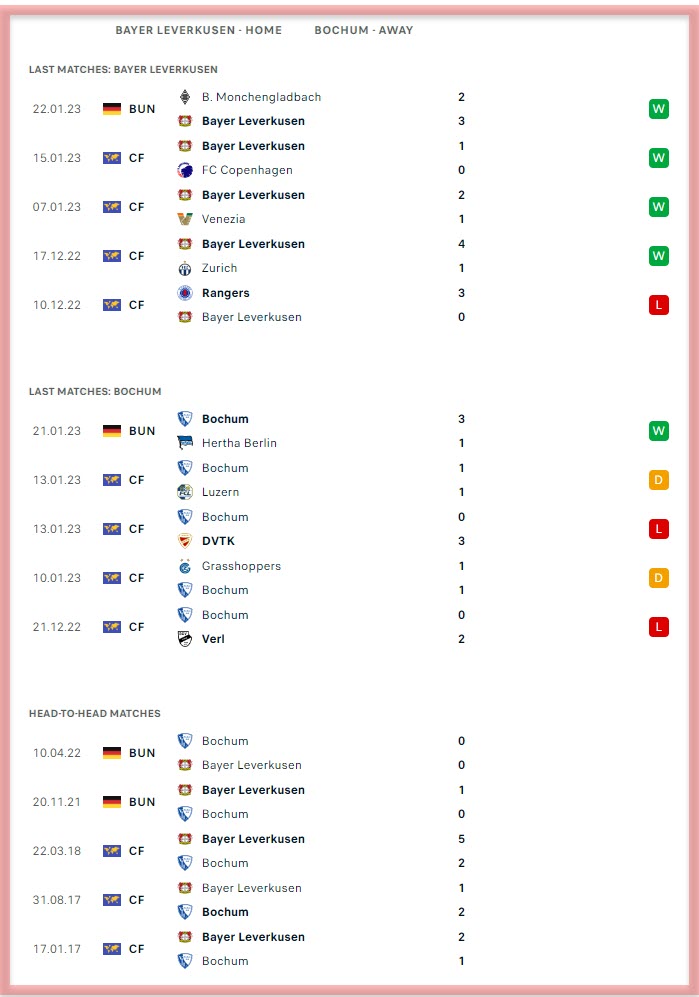