In that game, Mainz had 44% of the possession and 2 of its 13 shots on goal were successful. Marcus Ingvartsen (40′) was the sole player for Mainz to register a goal.

Stuttgart, on the other hand, had 16 shots total, 4 of which were on goal. Stuttgart’s goal came in the 36th minute from Serhou Guirassy.

Mainz hasn’t preserved a clean sheet in far too many of their recent games. The data indicates that in 5 of their previous 6 matches, Mainz failed to stop opponents from scoring, allowing 12 goals in the process. Having said that, it is still uncertain whether this trend will continue in this game.

Borussia Dortmund enters this match off a 4-3 victory against Augsburg in their most recent Bundesliga 1 contest.

Borussia Dortmund controlled 68% of the ball during that game and attempted 27 goals, 4 of which were successful. Jude Bellingham (29′), Nico Schlotterbeck (42′), Jamie Bynoe-Gittens (75′), and Giovanni Reyna (78′) scored the goals for Borussia Dortmund.

Looking at their most recent head-to-head meetings, which date back to the 14th of December 2019, Mainz has won one and Borussia Dortmund has won four, with one match being tied.

During those matches, the two clubs combined to score 17 goals, with Mainz scoring 5, and Dortmund scoring 12, for a total of 17. There are 2.83 goals scored on average per game.

On March 16, 2022, Mainz defeated Borussia Dortmund 0-1 in the Bundesliga 1 matchday 25 matchup that featured these clubs. On that particular day, Mainz had 41% of the possession and attempted 11 goals, scoring one of them.

Borussia Dortmund, on the other hand, had 11 shots total, 4 of which were on goal. (87′) Axel Witsel scored. Sascha Stegemann acted as the official.

In the past four league games, Mainz has lost against Borussia Dortmund and have lost their last two league games at home.

In the last seven league games against Mainz, Borussia Dortmund has not lost. outstanding road record against them and are winless in their last two league games on the road.

In order to score against this Borussia Dortmund team, who will probably score and maintain their lead, Mainz will need to put on a strong performance.

Checking the latest betting odds for this match in the win-draw-win market, backing Mainz is best priced at 2.9, a wager on a draw is 3.75 & putting your money on victory for Borussia Dortmund gets you 2.33. Those are the best of the returns that can be secured at this very moment. 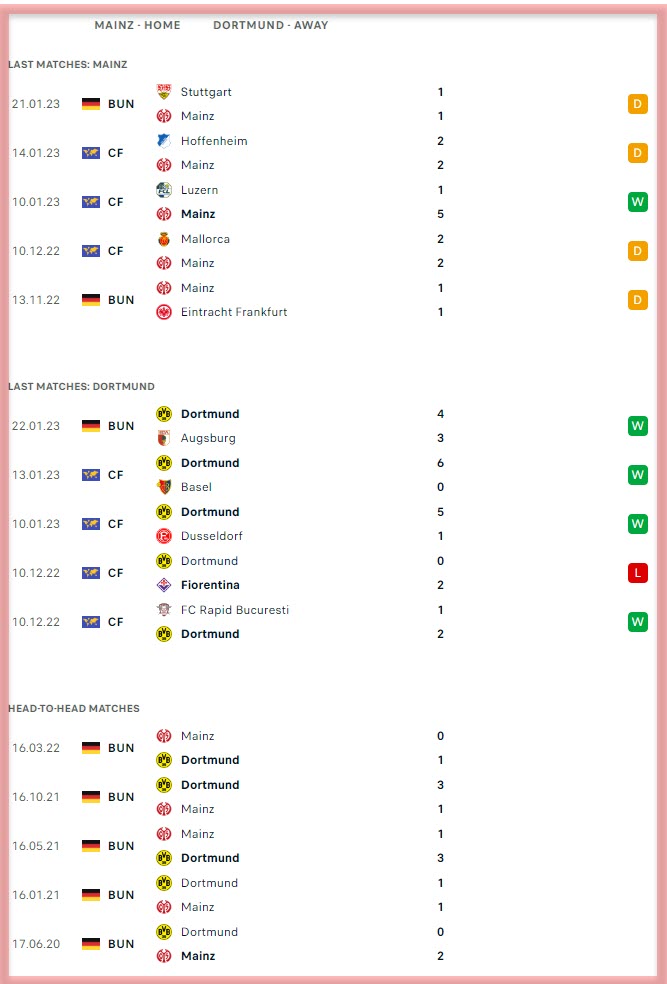