Udinese vs Lazio – preview and prediction – team news, and lineups

Udinese vs Lazio – Lazio go to the Dacia Arena today to face Serie A strugglers Udinese, looking to bounce back from another midweek setback.

The Aquile, who had already been eliminated in the Coppa Italia quarter-finals, lost in the Europa League on Thursday, despite winning three of their last four league matches. In the meantime, their hosts have only won once in five games and are dangerously near to relegation.

Lazio have been less productive away from home in continental play than they have been in Serie A, and their only win in their penultimate Europa League group game had finally put an end to an 11-game winless streak on the road in Europe. Following a midweek journey to Porto, they returned to Rome empty-handed once more.

Despite a 2-1 setback at Estadio do Dragao, their playoff tie with the Portuguese club remains in doubt, but they will undoubtedly be disappointed after losing a 1-0 lead thanks to Mattia Zaccagni’s near-post flick from a corner.

Only Empoli and Sassuolo have conceded more Serie A goals than the Bianconeri since the turn of the year, with Udinese picking up only two points from their past eight home meetings against Lazio, scoring four and conceding 12.

Following a 4-0 loss to Hellas Verona on Sunday, they have now gone three straight away games without scoring for the first time since 2019, and the slight improvement in results that occurred after Gabriele Cioffi was named as the successor to former coach Luca Gotti has begun to fade.

Cioffi’s men were unable to recover from a two-goal deficit against Verona in less than half an hour, and their setback dropped them to 15th position in the table with just over a third of the season remaining.

Ciro Immobile, who was left behind in Rome with a fever in midweek, will be given as much time as possible to rejoin the squad ahead of today’s match.

As a result, Felipe Anderson and Pedro alternated as the Aquile’s attacking trident’s ‘false nine’ at the Dragao, and would do so again if Immobile – who has been directly involved in 13 goals in as many Serie A matches against Udinese – is unable to make the lengthy journey north.

Danilo Cataldi and Toma Basic are ready to play in the visitors’ midfield, as Lucas Leiva and Luis Alberto are both suspended, while Maurizio Sarri will be without defenders Francesco Acerbi and Manuel Lazzari due to injury.

Following the four goals conceded in Verona, Udinese are anticipated to bring in Nehuen Perez in place of Marvin Zeegelaar in the back three, with Isaac Success poised to make way for top scorer Beto up forward.

The Portuguese forward was dropped last week after scoring his only Serie A brace in December’s thrilling 4-4 draw at Lazio. He has not scored in his last four league appearances.

Gabriele Cioffi is without Bram Nuytinck and Destiny Udogie, but midfielder Roberto Pereyra, who has not played since November due to a shoulder injury, might now return to the squad. Tolgay Arslan has also returned from suspension and is expected to start. 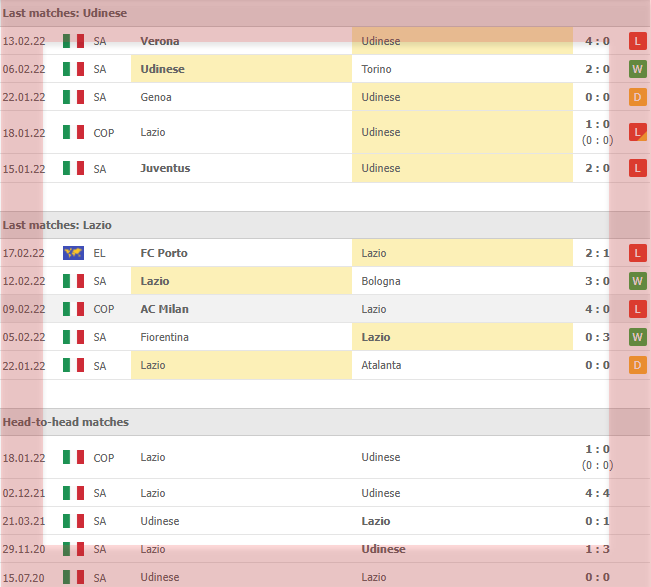 Fiorentina vs Atalanta
Venezia vs Genoa
Inter Milan vs Sassuolo