UAE vs Kazakhsta – Preview, and Predictions

UAE vs Kazakhsta – UAE want to snap a four-game losing streak against Kazakhstan on Saturday. Kazakhstan lost 2-0 to Uzbekistan on Wednesday, while the home team lost 5-0 to Argentina.

UAE has only appeared in one World Cup final, in 1990, when they were ousted in the group stage after three losses. Rodolfo Arruabarrena’s side placed third in Group A to qualify for the 2022 World Cup.

They faced Australia in the fourth round and lost 2-1, ending their hopes of going to the finals. UAE’s campaign was encouraging, and they’re currently preparing for the Gulf Cup of Nations in early January.

Arruabarrena’s squad hasn’t won since March, drawing one and losing four of their last five matches. UAE lost 5-0 to Argentina in a friendly on Wednesday, with Lionel Messi scoring twice.

Kazakhstan lost 2-0 to Uzbekistan on Wednesday, their second straight loss after losing 3-0 to Azerbaijan in September. Magomed Adiyev’s team hasn’t qualified for a World Cup or European Championship final, and 2022 World Cup qualification was challenging.

UAE manager Arruabarrena is anticipated to make changes from the squad that started against Argentina. Majid Rashid and Majed Hassan could come in. Ali Khasif could return in goal, but Ali Mabkhout and Caio Canedo should start again.

Mabkhout has scored 80 goals for UAE, while Canedo has scored seven in 25 matches. Before picking his starting lineup, Kazakhstan coach Adiyev must analyze his players’ fitness after the loss to Uzbekistan.

Islambek Kuat and Aslan Darabayev are slated to start on Saturday. Bakhtiyar Zaynutdinov has 10 goals and should start this weekend.

UAE will be desperate to come back from their five-goal loss to Argentina, so we’re favoring the home side. Kazakhstan’s loss against Uzbekistan on Wednesday could be repeated on Saturday. 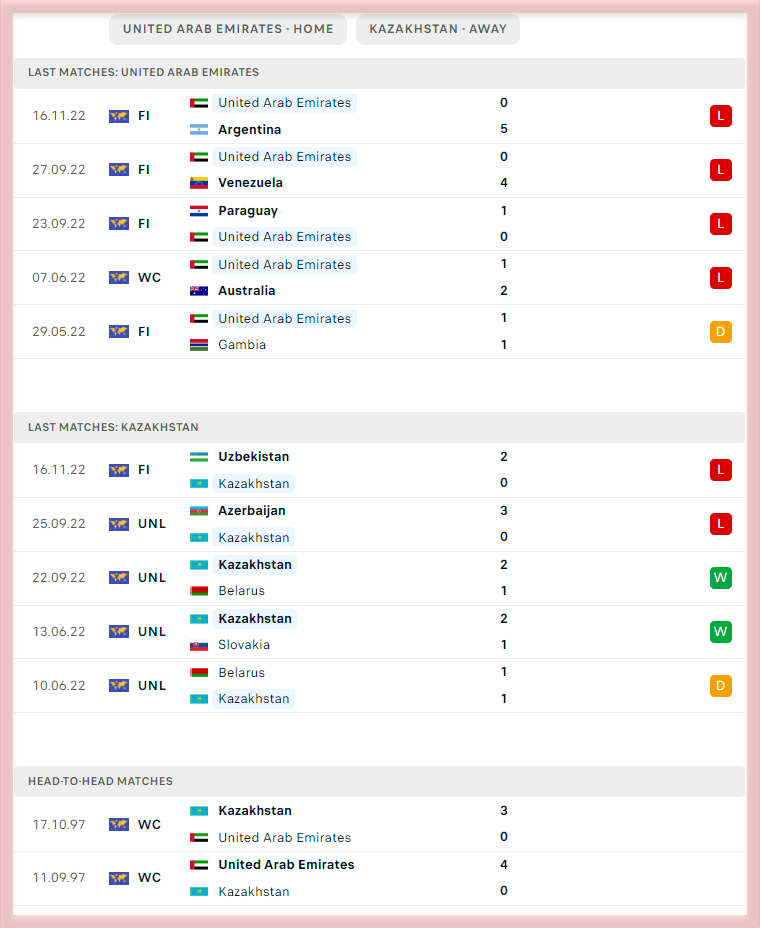