Southampton vs Watford – preview and prediction – team news, and lineups

Southampton vs Watford – Southampton is currently tenth in the table, and with ten matchdays remaining in the competition, their goal would be to finish in the top ten. They could make a push for one of the European spots, but it appears impractical at the moment.

Furthermore, they have performed admirably at home this season, and this momentum will undoubtedly come to their aid tomorrow.

Meanwhile, Watford are 19th in a 20-team table, just outside the relegation zone. They are also a recently promoted team, and they have shown signs of making a quick return to the Championship since the start of the season.

Furthermore, they have a poor head-to-head record against this rival over the years.

Based on these observations, Southampton should win tomorrow at St. Mary’s Stadium.

Importantly, they had won four of their previous five home games and were unbeaten in all but two league games at this venue in 2021-22.

Watford, on the other hand, was defeated 4-0 on the road by Wolves last week. They are also on a two-game losing streak and have gone winless in their last four games. It’s also worth noting that they had lost 16 of their previous 17 games.

Based on these observations, Southampton should win this Sunday at St. Mary’s Stadium. 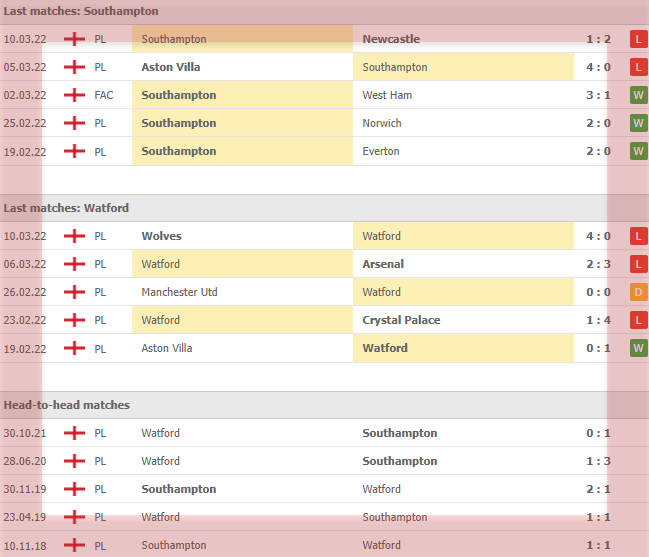