SonderjyskE vs Odense – preview and prediction

SonderjyskE vs Odense – Sonderjyske has been the worst team in the Danish league this season, as evidenced by their current position at the bottom of the table. They have only won twice this season and are on a long losing streak.

Throughout the current Superliga season, they have also conceded a large number of goals. Odense, on the other hand, has performed admirably.

They hold an 11-point lead and a much-needed victory in their most recent match. Expect them to capitalize on their recent success and win again on Sunday.

In the previous two meetings, the home team has scored two or more goals.

The penultimate matchday, Sonderjyske was defeated 2-1 by Viborg on the road. They’re also on a nine-game losing streak and have only won three games at this arena in the last 11 months.

Odense, on the other hand, defeated Nordsjaelland 2-1 at home last week. They have won three of their last five games and have been the better team in recent head-to-head matches.

Odense is expected to win this Sunday for the reasons stated. Sonderjyske are the team with the fewest goals in the competition.
They haven’t maintained a clean sheet at this ground in over seven months.
In the Relegation Group, only Vejle has conceded more goals than them.

Only Viborg, along with Odense, have managed to win their most recent match.

SonderjyskE vs Odense -Head -to- Head: 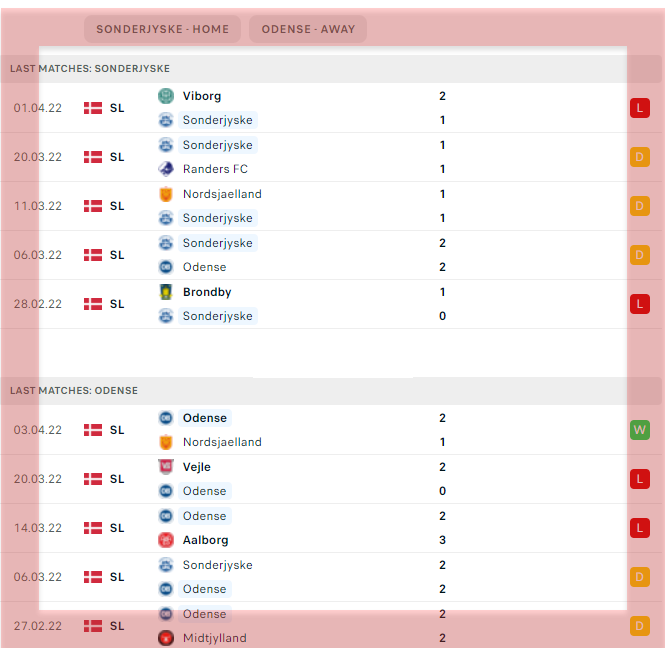