Silkeborg vs Randers – Preview, and Predictions

Silkeborg vs Randers – Silkeborg finished second in Danish football’s second tier in the 2020/21 season. They have a chance to qualify for the UEFA Europa League if they finish third in the Superliga in 2021-22.

Despite Silkeborg’s little budget in comparison to the other teams in the Championship Group, head coach Kent Nielsen is doing wonders with the team these days +.

Nielsen’s team narrowly missed out on a playoff spot in the Championship Group by finishing the regular season inside the top six in the league table (sixth).

Despite the fact that most pundits expected them to struggle, Nielsen’s team won five straight games after their first defeat against Midtjylland.

They have climbed to third place in the Championship Group rankings and appear to be on track to qualify for the UEFA Europa League next season (if Midtjylland wins the Danish Cup, the third-placed Superliga team will take the Europa League spot).

Silkeborg are two points ahead of AaB, who are in fourth place, and four points ahead of Randers, who have climbed to fifth place after crushing Copenhagen and Brondby in the previous two rounds.

Nonetheless, Silkeborg must be considered the favorites to continue their winning streak. Nielsen’s team has scored at least two goals in each of their past five games, including four in a 4-2 victory over AaB on Monday.

Silkeborg beat Randers 1-3 three days ago, and In four of the previous five head-to-head meetings between these two rivals, the score has been 2-1.

The last seven head-to-head matches have all ended in a winner, and Silkeborg is in fantastic form right now, and we can only expect them to keep it up here and win their sixth game in a row.

Randers were defeated 3-0 away at AaB before defeating Brondby 0-1 in their previous two away games. At 1.61 odds, we might discover value in backing Silkeborg to score two or more goals. 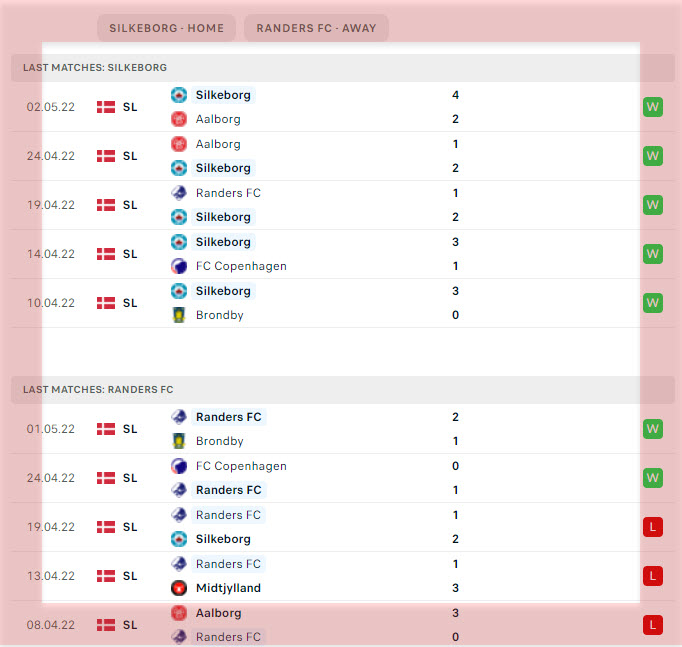