Peterhead vs Dundee – preview and prediction, team news, and lineups

Peterhead vs Dundee – Dundee will put their Scottish Premiership woes behind them when they take on Peterhead in the Scottish FA Cup fifth round on Monday evening.

While Peterhead is now in the third division, the Blue Toon will be optimistic about their chances of causing an upset against Balmoor.

Dundee supporters would have been apprehensive about their team’s chances in the second half of the season after five consecutive defeats in 2021.

While they are still struggling in the Premier League, the Dee have only lost two of their last six games in all competitions.

Peterhead have had an equally terrible season in Scottish League One, currently sitting in ninth place and only a point clear of second-bottom Dumbarton.

Manager Jim McNally, a former Dundee player, has seen his team lose five league games in a row, with only one goal scored during that time.

Zeno Ibsen Rossi, who has joined Dundee on loan from Bournemouth, might make his debut right away, according to McPake.

If McPake shifts from a 3-5-2 formation, veteran Niall McGinn is an option, although Leicester City loanee Vontae Daley-Campbell is unavailable due to suspension.

For this match, Charlie Adam may be relegated to the bench, allowing Max Anderson to return to midfield.

Scott Brown could be re-drafted into Peterhead’s midfield as a substitute for Flynn Duffy.

After coming out early in the second half against Alloa Athletic, David Wilson will be evaluated, with youngster Owen Cairns ready to take his place. 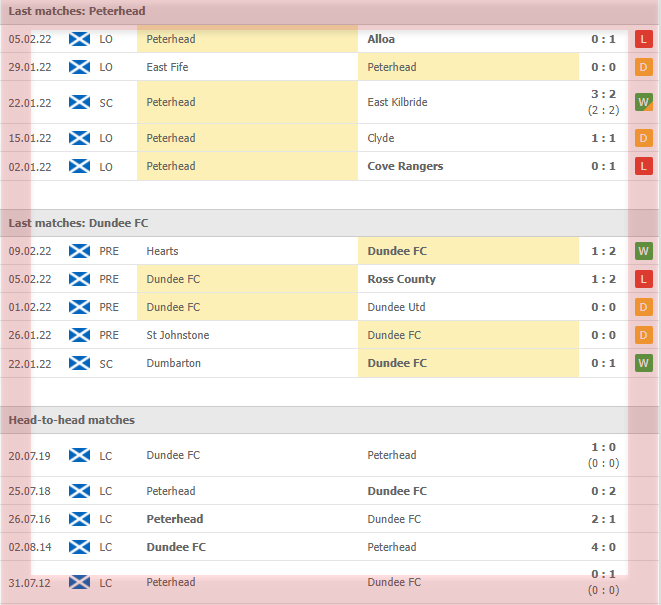 Despite their dismal League One position, Peterhead will welcome the opportunity to play with no restrictions and cause an upset. On Monday night, though, we must back the visitors to win, albeit by a slim margin.