Nantes vs Monaco – preview and prediction – team news, and lineups

Nantes vs Monaco – Following an intriguing change of events in the Coupe de France quarter-finals, both Ligue 1 teams have their sights set on the finals. Nantes has gone undefeated in the French Cup since their last match, whereas Monaco has struggled to win in Ligue 1 recently. Monégasques will go to Stade de la Beaujoire on March 2nd, seeking to punch their ticket to the finals after facing the Canaries.

Monaco has won four of the last six head-to-head meetings, with two draws. In total, 10 goals were scored in those games, with an average of 1.67 goals per game. Their last two head-to-head meetings have finished in a tie the last time Nantes defeated this foe was in Ligue 2 in 2012. Monaco triumphed 3 -2 in their last Cup meeting in 2007, when they met in the Coupe de la Ligue.

After a 2-0 win over Brest, Nantes advanced to the round of eight. They were therefore paired with Ligue 2 opponent Bastia, who had earlier defeated French first-tier opponents Reims by a score of 2-1. The Canaries won the match after gaining an early lead thanks to a penalty and adding another in the second half.

Nantes just upset PSG 3-1 in the league, giving them back-to-back league victories. They are now 7th in the league with 38 points after 25 games. They are even on points with Monaco, who are ahead of them with 11 wins.

On the other hand, Monaco was due to play Lens in the round of eight, and the match concluded 4-2 in favor of the Monégasques, who advanced to the quarterfinals against Ligue 2 opponents Amiens, who had previously defeated Nancy. Their match ended in a 2-0 victory, with goals in both half.

Monaco has drawn its last two league games against Lorient and Bordeaux, but they have won their last three Ligue 1 games. They are 6th in the league with 38 points after 10 victories and 8 draws so far.

We believe a win for Nantes is in the cards, given they have only lost three times at home this season and are unbeaten in their previous eight games at Stade de la Beaujoire in all competitions. In addition, the visitors’ away schedules are merely ordinary. 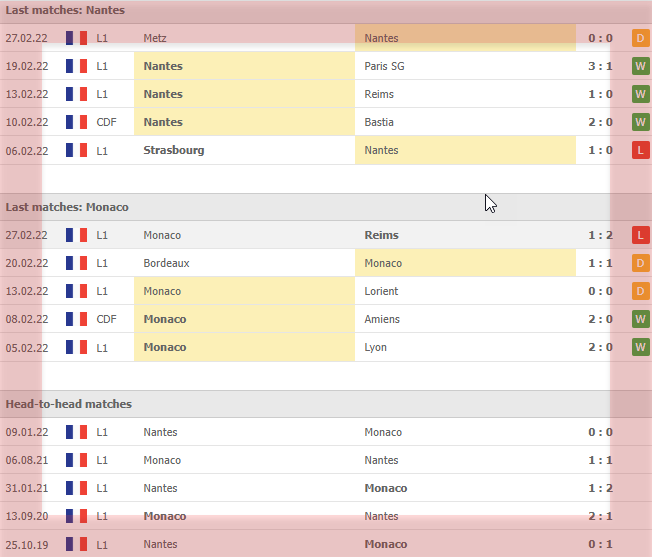