Libertad vs Caracas – preview and prediction

Libertad vs Caracas – Libertad have been outstanding in the top division of Paraguay recently, and they intend to extend that success into the Libertadores. They’re hitting the back of the goal at an alarming rate, particularly at home.

Meanwhile, Caracas has been out of form for some weeks and has been a complete disaster on the road. It’s also worth noting that they have a dismal head-to-head record versus this opponent at this arena so far. Libertad should win tomorrow, based on the current situation.

Caracas, on the other hand, had lost eight of their previous ten games and had failed to score in three of their previous five games. It’s also worth noting that they’ve only won twice on the road since August.

Libertad is expected to win on Wednesday based on these findings and historical home-and-away outcomes at this venue.

Libertad has a perfect record in the league this season, with only one tie. They have the most goals scored and the fewest goals surrendered in such games.

Caracas, on the other hand, had only two wins throughout their entire career. Since August, they’ve only managed to win two games on the road.

Nonetheless, we may expect both clubs to score in this encounter. After all, both teams have scored in 57 percent of all Caracas matches this season in the Venezuelan league, and 44 percent of all Libertad games in Paraguay thus far.

Libertad vs Caracas – Head -to- Head: 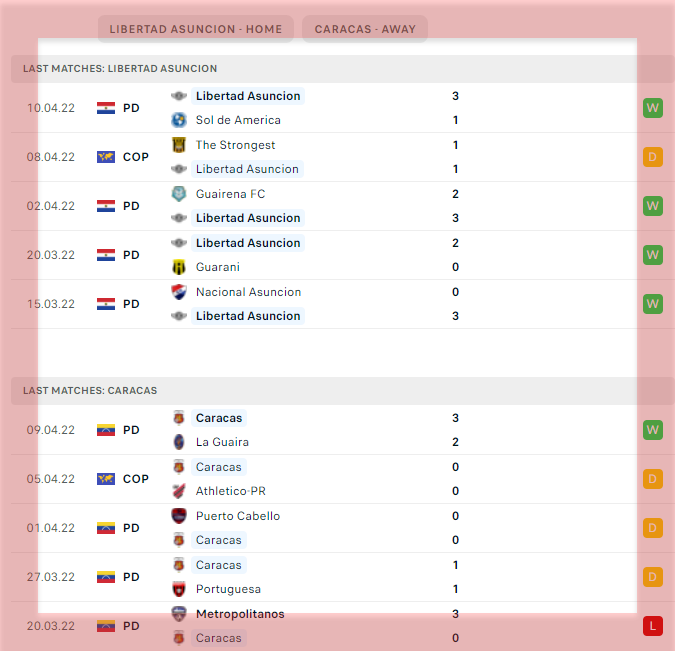